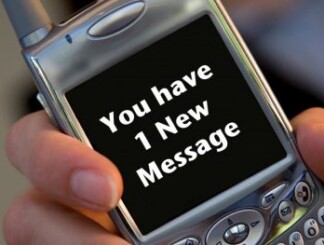 LAHORE: The message says you still have a chance to win Rs50,000 an hour as long as you respond “WIN” to 5555. It is signed by a major cellular service provider but comes from an unknown number.

This is known as a “spoof’ message, and the software with which to send it is available for a mere Rs150 in the marketplace. Authorities have thus far failed to initiate any action against those who are sending fake SMS messages from individual’s mobile numbers without their knowledge or consent, a term that is technically known as SMS spoofing, The Express Tribune has learnt.

The new system, dubbed “Evil Mobile Software”, allows people to send text messages from any mobile number. The software could have disastrous consequences.

The contents of a memorandum issued by the Special Branch which was sent to the Punjab Home Department, Interior Ministry, Federal Investigation Agency (FIA) and police revealed that the software used for sending spoof messages is now available in the market.

The memorandum further reveals that the software can be purchased from unidentified sellers who advertise on the internet, where a mobile number is advertised on which one can call and make a payment through “Easy Paisa” load. Thus, the identity of the seller remains concealed.

Most of these advertisements are posted on the Hafeez Centre classified portal. Javed Iqbal, who operates under the pseudonym Imran Ullah, is a key person involved in this business in Lahore. Despite the identification, no agency has interrogated Iqbal yet.

The software can create serious security problems including: threat messages, communication among terrorists, bank fraud, a rumour mongering campaign, etc. Additionally, the acceptance of text messages as evidence in investigations could become difficult.
There is an immediate need to take action against those persons involved in the sale of this software in order to avoid serious consequences and complications. The memorandum recommends that the Pakistan Telecommunication Authority (PTA) should be asked to take appropriate action to block the use of this software through the internet.

Additionally, it says the Hafeez Centre Union should be asked to block these advertisements on its portal, and police should take action against those who have been identified as involved in the business, especially those whose mobile numbers are provided on these portals. After receiving the memorandum, the Punjab Home Department asked the Federal Secretary Interior and Chairman PTA to take action.

The extracts of the Punjab Home Department’s circular reads, “It is recommended that appropriate action may please be taken to block the use of this software through the internet to avoid any untoward incident.”

Despite revelations on the software as well as tracing a key member of the network by the Special Branch of Punjab Police through the FIA, no arrest has been made.