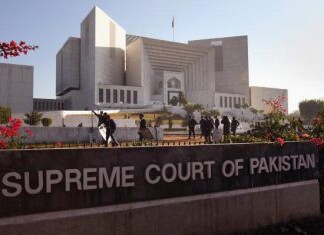 ISLAMABAD: Umme Hasaan, the head of Lal Masjid’s Jamia Hafsa girl seminary, hotly denied to the Supreme Court on Thursday that she ever had any association with the Pakistan-origin Tashfeen Malik linked to the recent terrorist shooting in San Bernardino, much less have her as a student.

She appeared even more combative when she declared that she will file a damages suit against television anchorpersons for insinuating the same charge against her husband, Maulana Abdul Aziz.

“My husband has been photographed many times in the company of different people, including those anchorpersons who are now pointing fingers at us,” she said and asked: “Does that mean we have connections with all and sundry?” Agitated, she demanded why her husband was linked to “every incident”.

Indeed, a lawyer representing her husband soon informed the court that the suit had already been filed.

Umme Hasaan spoke before a three-judge bench of the apex court, headed by Justice Ejaz Afzal Khan, which took up her husband’s plea for payment of blood money for those killed in the July 2007 military operation in Lal Masjid of which Jamia Hafsa was then a part.

Shahid Orakzai, one of the petitioners in the Lal masjid case, was the first to mention Tashfeen’s name in courtroom No 2 while inviting the court’s attention to the San Bernardino terror attack as a serious security issue for Pakistan.

“It is evident from the policy debate between 13 aspirants in the race for US presidency in Las Vegas on Thursday that the next presidential elections will revolve around the internal security of America,” said Orakzai.

Though the Republican candidates never mentioned the name of Pakistan, he said, all were unanimous that the biggest threat to US internal security will come from the Islamic radicalised terrorists and referred to Tashfeen many times in this regard.

“All I could pick up from the tenor of the debate is that the US internal security is going to have a direct fallout on Pakistan,” he said.

Advocate Tariq Asad, representing Maulana Aziz in the Lal Masjid case, informed the court that he had instituted a damages suit against the private television channel which first connected Tashfeen with his client.

Orakzai took strong exception when the advocate stated that “everybody understands on whose behest Orakzai is appearing.” However, the court asked Orakzai to submit a separate application highlighting what he had stated.

At the moment the court was not concerned about what Tashfeen was up to, or who was she, from where she had come or what was her origin was.

About Maulana Aziz’s application seeking an order for the federal government to implement the Oct 2 2007 judgment for the payment of ‘diyat’ blood money to heirs of Lal Masjid victims, the court ordered Attorney General Salman Aslam Butt to inform it on the next hearing as to what the government had done to implement its verdict.

Advocate Asad then pleaded for access to certain documents so as to reach the truth regarding the 2007 military operation against Lal Masjid. These documents were declared classified by the Supreme Court on April 18, 2013, while ordering that the Lal Masjid Commission Report be made public.

In its rejoinder to a similar request made in the past, the federal government had stated that the petitioner did not provide cogent reasons for opening the classified documents, adding doing so would create chaos and discord in society.

However, on Thursday, the court ordered the attorney general to go through the documents and inform it in the next hearing whether exposure of these documents will be detrimental to the integrity and security of the country or rather help in the hearing of the case.

“We do not want to keep these in opaque privacy and will decide about the matter after the AG made a statement before us,” Justice Ejaz observed.

Separately, the court asked Umme Hasaan to move a petition under the enforcement of fundamental rights for her missing son-in-law Hafiz Salman Shahid, who she alleged had been picked by unknown people in July.