LAHORE: Veteran Indian actor Om Puri, referring to a lynching incident in Dadri, India, in which a mob attacked a Muslim family, termed the happening shameful for his country.

Mr Puri who is currently in Pakistan on a three-day visit to attend International Film Festival organised by Rafi Peer Theatre Workshop (RPTW), was talking to the media at Alhamra Art Centre, The Mall, on Thursday.

Speaking on the cow slaughter issue in India, the actor said those who wanted to put a ban on slaughtering cows in the country were hypocrites.

“We export beef and earn dollars from it,” adding that neither such a controversial issue should be fanned, nor any provocative and misleading statements be given in this regard.

When asked about singer Ghulam Ali who had to cancel his performance in India amidst an extremist wave there, Mr Puri regretted the incident saying it should not have happened.

Pays tribute to Lahore He said the governments on both sides should not be scared of such attitudes, adding that some 80 to 90 percent people in India were secular and they held no grudge against Pakistanis.

He said that to those Indians who saw Pakistan as an extremist country, he would often argue that if that was the case then why schools and mosques there (in Paksitan) were bombed. In India, he said, not all segments of society were violent, and added there were certain misled people in both countries who were involved in such detestable activities.

“I request all those misled people to quit the ways which lead to hatred,” he said.

“Allah has warned against taking lives of innocent people, why being humans such elements were behaving like animals,” he asked.

To a question about Lahore, he said, had India and Pakistan been one country Lahore would have been the centre of the film industry instead of Mumbai. “Lahore is a great historical city,” he added.

To a question about cricket between India and Pakistan, Mr Puri said the two countries should not stop playing cricket.

He appreciated RPTW for their efforts in promoting art and culture and holding festivals.

Indian film director, producer and script writer Madhur Bhandarkar, who made films like Fashion, Traffic Signal and Chandani Bar, said he was excited about his visit to Pakistan.

He said films always connected people. He said both Pakistan and India had amazing talent in singing, acting, direction and other fields. He was also given an award later in a ceremony by Pakistan’s veteran film actress Zeba on behalf of RPTW. 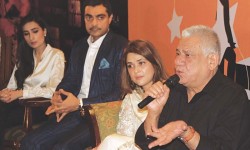 Did you know? Om Puri ran a chai kiosk in his childhood