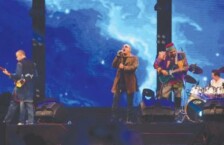 KARACHI: Music was in the air. Karachi hadn’t experienced live music on such a grand scale in a long time. On Tuesday, it finally happened.

Music lovers poured into the Moin Khan Academy to listen to Junoon, the band that defined an era in Pakistani music, the 1990s to be precise, when lines between (Pakistani) pop and rock were creatively blurred to produce sounds that were melodious and meaningful. The Sufi rock group had come together to perform after more than a decade.

Though the concert began after 6pm with contemporary musical outfits opening the gig, it was Junoon that most of the audience, especially over the age of 40 (and there were plenty of them) were waiting for. Though the band’s arrival was announced by the host Faizan Haqee (whose favourite word of the day was momentous) 15 minutes to 8pm, it took Junoon more than 20 minutes for sound-check. Still, the crowd didn’t mind. They wanted music come what may.

The dramatic entry of the band was highlighted by a voiceover in which people were egged on to think about their country. It made segue into the first song Junoon se aur ishq se milti hai azadi pretty easy. The next two tracks were in the similar vein, the famous Zamane ke andaz badley gaey and Khudi ko ker buland itna — compositions set to Iqbal’s poetry. Quite a few members of the audience sang the two songs along the lead vocalist Ali Azmat (who was wearing a dazzling attire that would’ve made him visible even if there was no electricity). Guitarist Salman Ahmed, too, was dressed up the way he usually does at concerts with a longish, prominent headgear.

The mood then shifted to the more melody-driven and less message-oriented Sajna. But the show took a beautiful turn when Junoon performed the lyrically rich and musically opulent Neend aati nahin. It was such a delight to see the crowd know the lyrics to the song as if it was a modern-day hit. And how could Junoon not have reminded music buffs of the great Nusrat Fateh Ali Khan? Their transition to one of their most popular numbers, Ni Heerey, began with Khan sahib’s melodious and melancholic Shamaan payyan.

However, one has to say that of the three principal band members, it was Brian O’Connell (bassist) who looked in his element. Ali was good, but one’s not sure if Tuesday’s performance was his best.

Earlier, four bands played before Junoon: Lyari Underground, Khumariyan, Tamasha and Sound of Kolachi. Without a shadow of a doubt, Khumariyan and Tamasha were impressive. In fact, Tamasha were brilliant. Their version of Raag Neela (Aaroh’s song) was splendid. It had the punch, the feel and the oomph that rock songs should have. Their original songs Paisa Phaink and Roshni were good as well.

A nice little moment in the concert was witnessed by the large crowd when two members of Khumariyan did a bit of an Afghani dance during one of their nicely played songs. More live music, and Pakistan’s music scene will regain its lost glory.