Until next year: KIBF concludes much to the dismay of book lovers | Pakistan Press Foundation (PPF) 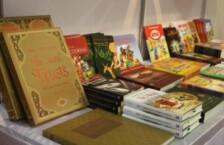 KARACHI: The five-day Karachi International Book Fair (KIBF) 2018, organised by Pakistan Publishers and Booksellers’ Association (PPBA), successfully concluded at the Expo Centre on Tuesday. A record number of 0.6 million people attended the event this year. KIBF 2019 is expected to be held from December 5, 2019 till December 9, 2019.

Talking to the media, Siddiqui said that holding the international book fair in Karachi was laudable and that the enthusiasm of the visitors has shown that people still love traditional books. He said that KIBF should be supported by all and the event can be bigger and better in the coming years. Although digital books are available in today’s era the significance of physical manuscripts still remains, he added.

PPBA Chairperson Aziz Khalid, KIBF Convener Owais Mirza Jameel, KIBF Deputy Convener Waqar Mateen and KIBF Coordinators Taha Jamal and Sheikh Alamgir were also present on the last day. They thanked book lovers and said that the book fair attracted thousands of people each day and succeeded in what it had aimed to do, which was to promote book reading culture among the people.

PPBA Chairperson Aziz Khalid said that KIBF had been postponed this year due to the Ideas Exhibition. He announced the dates for KIBF 2019 and said that representation from all four provinces will be ensured next year. He thanked the book vendors for their support, in particular those who came from Jhelum, Peshawar and Lahore. “We try to bring the people working on books, literature and national languages under one roof,” he said. Khalid also commended the educational institutes which had attended the book fair with their students despite the ongoing winter break. “I’m thankful that thousands of people from all over the country visited the book fair to promote book reading and their cooperation remained with us. The citizens have proved that we are a peace loving and book friendly nation,” he said.

Visitors at the book fair appreciated the large variety of books that were available during the five-day event. According to KIBF organisers, this year it was mostly educational and Islamic books, among others, that were bought with fervour and enthusiasm by the people.