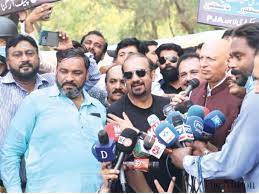 The journalists, protesting outside Governor House, also ended their sit-in following the announcement by the governor.

According to details, the Punjab governor visited the sit-in staged by the journalists outside Governor House on Friday and announced to accept all their demands after which journalists announced to end their protest.

On the occasion, the governor told the media that Punjab Chief Minister Usman Buzdar and Punjab Assembly Speaker Ch Parvez Elahi were also on the same page to revoke those articles. “Our government will not censor the journalists’ reporting and their opinions.”

He said that Prime Minister Imran Khan and the PTI government strongly believed in the freedom of press. “Journalists will find me standing by them every time when they come here for rightful demands,” he remarked.

“I have spoken to Speaker Ch Parvez Elahi on phone regarding this matter. We will revoke all the articles regarding journalists from this bill through amendments and change the bill keeping in view the demands of all the journalists. I struggled all my life for the freedom of press and media, and our government cannot even think of censoring the media’s voice. The way journalists have fought their case in this scorching heat shows that they are committed to their cause,” he observed.