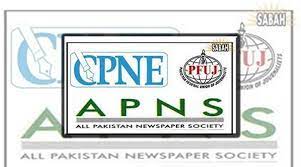 ISLAMABAD/ KARACHI: Various media organizations Friday rejected the Punjab Privileges (Amendment) Bill, 2021, passed by the Punjab Assembly, terming it an attempt to suppress the press freedom in the province.

The All Pakistan Newspapers Society (APNS), Pakistan Broadcasters Association (PBA) and the Pakistan Federal Union of Journalist (PFUJ) issued separate statements and strongly condemned the provincial government move to punish the media persons on one pretext or the other.

APNS President Sarmad Ali and Secretary General Nazafreen Saigol Lakhani, in a statement said that the bill provided a judicial committee of the house with dictatorial powers to order arrest without warrant of a journalist and award sentence of six months with fine of Rs10, 000 without adopting the legal procedure if the committee is of the opinion that any privilege of a member is violated.

The APNS office-bearers said that no such bill or action would be accepted by the journalist fraternity and human rights activists. The Society called upon the provincial legislators and the Punjab government to withdraw the anti-press bill without delay.

The PBA also rejected the controversial bill, which authorises the speaker to form a judicial committee with powers of magistrate first class, and the body may get arrested the journalist without warrants from the assembly precincts and award him up to six months jail term along with fine for breach of any privilege mentioned in a schedule inserted into the Privileges Act II of 1972.

The PBA demanded the Punjab government to immediately withdraw the bill, which had been passed in sheer disregard to all democratic norms. Separately, the PFUJ strongly condemned the bill to punish journalists. A statement said the Punjab Assembly adopted the bill in haste and without proper debate in the house and the committee concerned.

PFUJ President Shahzada Zulfikar and Secretary General Nasir Zaidi urged the government to withdraw such a piece of law which had been designed to punish journalists and members of bureaucracy to silence them. “This law is a proof that political parties are against freedom of the press and free speech and against transparency and accountability,” they said.