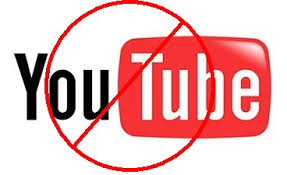 There was a recent news item suggesting that the ministry or governmental authority or whatever had declared that the ban on YouTube was not going to be lifted in Pakistan any time soon. The reason given was that improper content could not be removed from it. By improper content we all know what is meant. Primarily, one particular video is what this ban is all about. Here I think it is important to point out what is otherwise generally known: those really interested in accessing YouTube have already figured out how to do it, ban or no ban. And I am sure that these people are definitely not viewing the aforementioned video. If they really wanted to watch it they have probably done so already. The question then is: why the continued ban on YouTube?

Anybody who uses the internet regularly, especially to read foreign newspapers or any other source of information, inevitably comes across material that could be considered blasphemous. Concerning the notorious cartoons that created quite a stir in Pakistan a few months ago, most foreign newspapers published copies of those cartoons. Interestingly, The New York Times was one major newspaper that avoided doing so. The point really is that much that can be considered blasphemous is available to people in Pakistan even with the YouTube ban. However, as I was researching for a short article on the early history of Islam, I tried to search for ‘Muhammad’. To my utter disbelief, the Wikipedia entry on Prophet Muhammad (PBUH) was blocked, obviously by the Pakistani side. And that did make me wonder who decides to block which site on the internet.

It is conceivable that as the mullahs keep on agitating against access to anything on the internet that is identifiably uncomplimentary towards Muslims, we will end up with bans on an increasing number of internet sites. However, the mullahs, in their ignorance about the internet, do not realise that blocking any number of sites does not prevent access to the sort of information they find objectionable. The only way to assure that nobody living in Pakistan can read any ‘blasphemous’ material on the internet is to prevent any access to the internet. Perhaps that is the direction we are going in, the so-called slippery slope towards complete censorship. But then we will also have to ban things like satellite television, which provides unfiltered foreign content that could also be quite reprehensible.

The next question about preventing access to inappropriate material brings us to the problem of Pakistanis travelling abroad and those Pakistanis who live in foreign countries, especially in the Godless west where blasphemous material is freely available. In this matter, the mullahs will have to decide pretty soon about the ‘purity’ status of those Pakistanis who have been exposed to such material while abroad and who did not try to kill all those responsible for propagating such material. Should such people even be allowed to re-enter Pakistan in this befouled state? Here, it is obvious that the only way to prevent ordinary Pakistanis from exposure to objectionable stuff is to prevent them from leaving the country. Only people who have been certified by the mullahs to be entirely incapable of either viewing or understanding any form of blasphemy (the totally ignorant?) should be allowed to go abroad. And even then somebody, preferably a mullah, must be with them to keep an eye on them.

This might sound excessive but I still remember a picture from a UN meeting during the heyday of the Soviet Union. The picture showed the Russian representative in front with one person watching him very carefully and another person watching the watcher very carefully. Clearly such surveillance will be necessary for any Pakistani who does go abroad. And if there is any evidence that such a person wilfully and deliberately indulged in watching forbidden materials then that person must be forced to return to Pakistan immediately and face justice. This could open up an entirely new reason for demanding political asylum while visiting any country in the European Union or in the United States and Canada since, on return to Pakistan, a person who willingly indulged in watching forbidden material could be executed urgently.

I can just imagine the hordes of Pakistanis in any of the above countries getting their picture taken with a ‘blasphemous’ cartoon prominently displayed next to them, putting that picture on social media and then demanding asylum. Even though I claim no expertise in such ‘legal’ matters, I am sure that no civilised country will deport a ‘foreigner’ back to a country where he or she might be subject to the death penalty for a crime that is not even considered a crime in the host country. Though I would not be surprised if they somehow made an exception for Pakistanis. Our Pakistani ‘elites’ who frequently frequent countries where blasphemy runs rampant must also be looked at very, very carefully. Clearly such persons must be water boarded to find out if they ever wilfully and deliberately watched blasphemous material while abroad and then punished appropriately. Fortunately, this will probably rid Pakistan of almost the entire leadership of all our political parties. If nothing else that would be great.

Finally, about our impressionable youth. Clearly they must be prevented from any access to the internet lest their fragile minds are contaminated by ‘inappropriate’ material. More importantly, none of these young people should be allowed to go abroad for education. We all know exactly what sort of things they will see and learn about while they are supposedly getting an education. Purity of the fragile Pakistani mind is definitely more important than the inevitable contamination by an advanced education in the Godless west. And, yes, I have a question for our mullahs: how do you figure out that something like a cartoon or a video is blasphemous without first wilfully and deliberately reading, seeing or watching it?