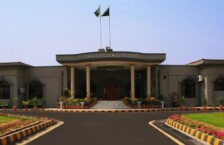 Chief Justice Athar Minallah clubbed all cases against social medial rules and heard them together.

At the outset of hearing, Usman Warraich Advocate adopted the stance that this court had also appointed digital experts as amicus curiae so that their opinion could also be taken.

The court said it had to view only one question whether the social media rules were contradicting with Article 19 of the Constitution or not.

The court remarked that according to some international organisations, this bench was against the freedom of expression then why not cases should be transferred to any other bench to ensure transparency.

However, the lawyer opposed the proposal and said they had full trust in this court. The hearing of the case was adjourned till February 3.

Separately, Justice Minallah heard identical cases pertaining to the construction of the Naval Sailing Club and naval farms and reserved the judgment after listening to the arguments.

At the outset of the hearing, the chief justice asked the CDA’s member that the court wanted to clarify two points before announcing its verdict. He asked whether the civic body issued a no-objection certificate to anyone despite there being no such provision in law. The court further asked whether the constructions in zone-IV could be made in 1994.

The CDA member planning adopted the stance that “at that time farm houses had such permission”.

He further informed the court that the Naval Sailing Club was still sealed, adding that any building could be demolished if it violates the law.

To a query by the bench, the CDA member responded that if the NOC of a society was cancelled the authority used to take over the housing society and seal its offices.

The court then asked why any action was not taken against the constructions around the Rawal Lake.

The court subsequently reserved its judgment, which was likely to be announced today.