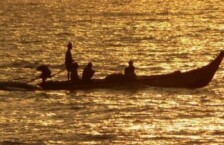 KARACHI: Fishermen are all set to launch the 14-day ‘Sindh Peoples Caravan’ on Tuesday (today) to stress the importance of climate change and food security.

The caravan, being organised by the Pakistan Fisherfolk Forum (PFF), will move through different districts of Sindh, including Thatta, Sajawal, Badin, Tharparkar, Umerkot, Naushero Feroze, Sanghar, Shaheed Benazirabad, Dadu, Jamshoro and Hyderabad. Majority of the participants are fishermen, peasants and labourers.

“Food insecurity is a global issue,” said PFF chairman Mohammad Ali Shah. “We are in favour of food sovereignty,” he added, saying poverty is increasing due to capitalism which ultimately ruins means of livelihood of people from the lower income group.

Speaking to The Express Tribune, Shah said food insecurity cannot be reduced until people have access to natural resources.

According to the PFF, the caravan aims to address key issues of climate change, gender inequality and food sovereignty. The purpose of the caravan will be to deepen, extend and nurture networks of grassroots movements in South Asia and build international solidarity around specific campaigns concerning issues of climate change and food sovereignty.

Talking about climate change, the PFF chairman said Pakistan’s contribution to climate change is less but it is on number five in facing its impact globally.

According to PFF programmes manager, Mustafa Gurgaze, the caravan is meant to create public awareness and highlight the issue of food insecurity. He said around 55% of Pakistan’s population is food insecure. “The majority of them live in the coastal belt of Sindh,” he said, adding that areas such as Umerkot and Tharparkar regions are also considered food insecure.

“The basic aim shouldn’t be to provide food to people but sovereignty must be ensured,” urged Gurgaze. He added that people who are directly involved in food making lack access to the food they generate. There is a need of agrarian and land reforms in Pakistan, especially in Sindh, he suggested.

Cultural and musical events have also been organised for participants in different areas. Starting from Karachi, the caravan will end in the province’s second largest city, Hyderabad, on March 14 where participants will also celebrate the International Rivers Day.