ISLAMABAD: Adviser to Prime Minister on Climate Change Malik Amin Aslam on Thursday said that Pakistan has spent four billion dollars for climate change and it was identified as the eighth most affected climate change country.

Addressing a Press conference, the Adviser informed that the international reports released at the 24th Conference of Parties (COP-24) held in Katowice, Poland under United Nations Framework Convention on Climate Change (UNFCCC) revealed the country’s vulnerability and endurance through the worldwide phenomenon of environmental degradation despite its least share in the overall pollution of the world for the last two decades.

He said that Pakistan has been frequently undergoing climate change phenomenon with increased intensity and frequency of natural disasters though the country has not been the perpetrator and contributor to the global environmental degradation yet playing leadership in steering endeavours to cope with the issue. The Minister said that the delegation presented Pakistan’s successful Billion Tree Project before the world, adding, “We apprised the international community that we have planted one billion trees in five years at a cost of Rs 14 billion hence ensuring beyond our Nationally Determined Commitments (NDCs) pledged under Paris Agreement of 2015. 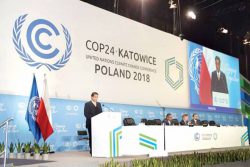