A look back at the creative Samina Quraeshi

Quraeshi’s two children, Sadia Shepard and Cassim Shepard, have put on display their mother’s printmaking from 1977 to 2013. The exhibition, which can be divided into six sections for simplicity, shows the artist’s strong graphic sense combined with local elements of her homeland: the landscapes of Sindh, camels, falcons, Mughal architecture and sufi thought.

The Bactrian Camel Series (1977) are photostat slides of sketches of camels combined with various colour washes. “In the early seventies, she worked for Pakistan Tourism Development Corporation and used to photograph extensively while travelling. These camel images are from those journeys,” explained Cassim, while talking to The Express Tribune.

“You see the same elements with different juxtaposition,” he said, referring to the extravagant detail of the photographed animals. Quraeshi once again exhibited her love for deserts and camels by photographing the Camel Caraven Series (1979), in which she used bright and unusual colours to show her emotional attachment with the landscape.

In the next series, one finds that Quraeshi’s fascination does not end with desert landscapes. The Falcon Series (1981) plays with themes of hunting and prey by hand-drawn large falcons. The fierce creatures, displayed with the minutest of details, makes one wonder about Quraeshi’s interest with the extraordinary, and the precision she has created to display that attraction.

Another feature of the exhibition is her illustrated published books. According to the statement, these books seek to communicate the richness and diversity that flourished in Pakistan. Lahore: The City Within (1989) explores the city’s living and historical traditions through text and illustrations. Her other books on display include Legacy of the Indus (1978), a collection of folk tales and Sacred Spaces (2010), which deals with sufism.

In her final series of prints, Mind Maps (2013), after which the exhibition has been named, one sees a summation of Quraeshi’s artistic drive. From calligraphy to cartography with sizeable use of mapping and geometrical representation, it gives a feeling as if she was trying to connect the dots in her work, sometimes going by logic and other times through art. The numbers, lines, geometrical shapes, frequent use of rulers, and other measurement tools are only testament to her interest in a wide array of sciences and disciplines – a link that perhaps only her own mind could make out.

“In 2012, while shooting for a documentary series with me, she suffered a stroke,” said Sadia, talking about the medical scans of the artist’s brain on display. How her brain functioned and was affected after the stroke was a matter of interest to her, explained the daughter.

Quraeshi died of heart failure in the fall of 2013. She held several teaching positions at top American universities and authored several books. She received the Tamgha-e-Imtiaz in 2006 for cultural preservation.

The show will continue till March 7 from 11am to 8pm. 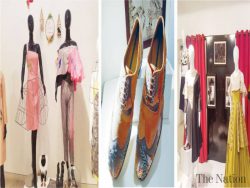