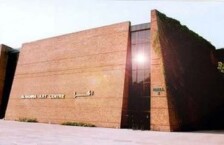 The Information Minister of Punjab Fayyaz ul Hassan Chohan has declared that no plays will be performed at Alhamra Arts Council in Lahore without the approval of the government. This decision is rightly being termed as an attempt to curb freedom of expression in the country. Pakistan has witnessed a steady decline in its art scene post the Zia era and Alhamra has provided the much needed space to many artists to showcase their talent – be it writers, poets, actors, singers or songwriters. Art is a medium which provides the populace a much needed break from their mundane life and in cities like Lahore, where food is a source of outing, Alhamra is a fresh breathe of air.

Curtailing the growth of art in a country already plagued by so many issues means taking away entertainment which citizens have a right to enjoy. At this point, pushing for each and every script to be approved only means creating delays in the art projects and that have been working well independently of government supervision. Alhamra provides space to different kinds of work and if their scrutiny is done to make them follow objective “guidelines”, the diversity in form and scripts, which is the hallmark of performance arts, will surely suffer.

The Punjab government needs to recognise no one is asking for this: this is neither something that the population of Lahore is vociferously demanding nor is this a promise that was part of their agenda. This policy would simply be a waste of the government’s precious time and resources, doing something that is simply unnecessary and unasked for.

Pakistan has not seen major development in its cultural and art environment’s in a long time and that is precisely because of such measures; which treat the performance arts as vulgarity or a threat. Lahore is a metropolitan hub and one of the aims of the new government is to transform Pakistan into a country where foreigners visit again. If such an aim is to be achieved, the mega cities need to accommodate a metropolitan culture rather than a much skewed perspective of the arts.

Arts are a source of soft power of a country and maintaining such a strict control over the narrative will push for the same view of the country. Developed countries that the Prime Minister often refers to in his speeches also, as a rule, have very progressive art environments and that help maintain the diversity of the country and also curtail radicalism.