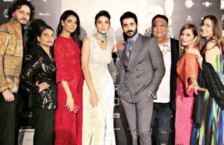 LAHORE: Every year Masala Award show celebrates the outstanding achievements of the members of the Asian community in UAE and this time it is no different.

The 11th edition of Masala Awards welcomed celebrities from both India and Pakistan who were present at the most happening night of the year.

From SheheryarMunawar to AmnaIlyas, from Osman Khalid Butt to Ayesha Omar, the Pakistani squad had their A-Game on last night. Similarly, there was Kareena Kapoor, Mika Singh and KartikAaryan were also present.

Kareena Kapoor bagged the award of Asian Icon of the Year, while Aamina Sheikh was awarded Best Actress for her performance in Cake, Osman Khalid Butt and AamnaIlyas were given accolades for being Agents of Social Change. SheharyarMunawar was given the Most Versatile Actor award while Ayesha Omar won Most Stylish Actress.

Last year at Masala Awards Mahira Khan, who made a Bollywood debut in Shah Rukh Khan’s Raees, was awarded Woman of Substance while MawraHocane, who did not have a movie in 2017 was recognized for her social media skills with the Social Media Sensation award. SabaQamar picked up Breakthrough Performance of the Year.

The News: Kareena Kapoor walks for Faraz Manan at the 11th Masala Awards