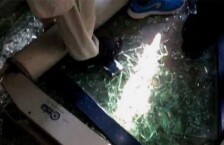 KARACHI: The central office of the Geo and Jang Media Group was attacked on Sunday by protesters in Karachi.

A mob broke a walkthrough gate installed at the entrance of the building as well as the main entrance door to the building. The staff inside the building were also attacked and violently pushed around.

According to Geo News Karachi Bureau Chief Faheem Siddiqui, protesters attacked the building “under an elaborate plot”. He said a protest had been announced in advance but “there were no law enforcement officers present” and no action was taken against the protesters when they attacked. The protesters were enraged over a video from a Geo News programme on social media, the edited version of which has gone viral, said Siddiqui. “What you see on social media is not how it was said on the show,” he said, adding that Geo News had also aired a clarification as well as an apology on the same show. “What remains to be known is who these protesters are,” he added. Anchor Irshad Bhatti from television show “Khabarnaak” clarified that his show is of comedy and satire and “Sindh and Sindhis are part of his identity as is any other province.”

“Ladies and gentleman, welcome. I wish to state here, that in the last one or two shows, our brothers from Sindh, where on the one hand showed us a lot of appreciation and gave us a lot of love, on the other hand, expressed reservations against a sentence or two.

“I wish to tell everyone this is a programme of satire and comedy, and the way Punjab, KP, Balochistan, GB, Azad Kashmir are dear to me, Sindh and Sindhis are a part of my identity. My life is dedicated to Sindh and Sindhis,” he said.

Managing Director Geo News Azhar Abbas, sharing footage of the damage left in the wake of the attack, wrote: “Everyone has right to peaceful protest. We will protect and support that right. But doing violence and taking the law into their own hands, regardless of the cause, can’t be tolerated. Dialogue is answer to all issues — not violence.”

Sindh Information Minister Nasir Hussain Shah arrived at the venue and proceeded to resolve the matter by speaking to the protesters. He had earlier also appeared on air to express solidarity with the media group. When asked why police did not act promptly, Shah said he strongly condemns such violence. “I spoke to the SSP and I was told the protest was to head from Shaheen Complex to Press Club but they came this way.” He said everyone has a right to protest but no one has the right to harm anyone. “Action will be taken against whoever took the law into their hands.” The information minister said that Chief Minister Sindh Murad Ali Shah has also ordered “strict action” to be taken against all those found involved.

Federal Minister for Information Shibli Faraz, speaking to Geo News, said that violence is not acceptable under any circumstances. “If someone has any grievance or reservations, they always have the choice to launch a formal protest […] I have found out that the matter pertains to a show where some light humour was aired. The immediate responsibility is that of the Sindh government […] why were no security forces available?” he asked.

Governor Sindh Imran Ismail said it was an unfortunate incident that had occurred and expressed his sympathies. “We must understand people’s sensitivities while airing things on our channels. Something occurred that hurt people’s sentiments. As far as I know, an apology and clarification were given by Geo, so this matter should have been let go of. “They could have still protested peacefully with banners, but violence can never be supported. So to all those protesting outside, I request: Please accept Geo’s apology and clarification. Forgive whatever transpired. This goes completely against the hospitality and love for people that are part and parcel of Sindh’s values and culture,” Imran said. The governor was surprised to know police had not sprung into action. He said he would ask the Inspector General of Police to look into the matter immediately and to send officers for the staff’s protection.

Minister for Interior Sheikh Rasheed condemned the attack on Geo News’ building and termed it a “cowardly act”. “The government fully believes in freedom of the press,” Rasheed said, adding: “I hope Sindh government will ensure the security of the Jang, Geo office.” He said his ministry will extend all possible support.

Minister for Science and Technology Fawad Chaudhry also condemned the attack and demanded that police take action against those responsible. “A disagreement does not mean you round up 200-400 people and attack a place,” he said.

Punjab Chief Minister Sardar Usman Buzdar strongly condemned the attack, terming it as an attack on freedom of expression. He also expressed solidarity with Geo and Jang, a handout said. Buzdar said the incumbent government believes in the freedom of media.

PML-N spokesperson Marriyum Aurangzeb, condemning the incident, said it must be probed in a transparent and unbiased manner. “We express our solidarity with Geo News,” she said. PPP MPA Awais Qadir Shah said that it was highly condemnable that an attack was carried out under the pretext of a protest. “This is a highly unfortunate incident which cannot be condemned enough,” he said. Shah said that the People’s Party supports freedom of expression and a fair investigation of the incident. Qaumi Watan Party spokesperson Ahmed Jadoon, condemning the attack, said that elements involved should be brought to justice. PML-Q President Chaudhry Shujaat and Speaker Punjab Assembly Chaudhry Pervaiz Elahi also condemned the violence. MQM convener Khalid Maqbool Siddiqui it was wholly unacceptable that a media house be attacked in such a manner under the guise of a protest. He said that the absence of police officers at the time of the attack raises a lot of questions.

The Association of Electronic Media Editors and News Directors (AEMEND) issued a statement strongly condemning the violent attack on the Karachi offices of Geo News “by a mob armed with clubs and stones”.

“AEMEND believes in people’s inalienable right to peaceful protest but using violence under the pretext of protest is unacceptable and is a clear violation of law,” read the statement. The association urged the provincial government to “take immediate action” against who vandalised the media office and subjected its staff to violence.

The APNS strongly condemned the attack on the Jang Group premises by demonstrators, who ranscked the offices and manhandled the employees of the group. Hameed Haroon, President, and Sarmad Ali, Secretary General, of the All Pakistan Newspapers Society, in a press statement termed the incident attack on the press and expressed their serious concern on the vandalism perpetuated by the demonstrators, who in the garb of protest and sit-in besieged the Jang Group’s main office in Karachi and instead of stressing and raising their demands, attacked and ransacked the office and harassed the staff, including female workers and journalists. They stated that every section of the society has a right to agitate its disagreement against any content, but it should not be allowed to take law into its hand and attack the premises of media organisations and intimidate media workers. This attitude not only depicts the intolerance exacerbating in our society but also highlights growing lawlessness in the country. It is regrettable that the law enforcing agencies in the city remained silent spectators when the media house was being subjected to vandalism.

The APNS office bearers urged upon the chief minister Sindh and the IG police to take immediate action against the culprits and provide security to media houses to prevent such heinious act against the media in future. Pakistan Federal Union of Journalists has condemned the attack on Geo and Jang offices demanding of the government to arrest the perpetrators.

In a statement, PFUJ President Shahzada Zulfiqar and Secretary General Nasir Zaidi slammed the police and Sindh government for the lack of action against the attackers. “It is unfortunate that the police were present there but they did not prevent the attackers. The police turned a blind eye as the mob ransacked the office besides beating up the staff.” They asked the government to throughly probe the attack. This is not an attack of Geo and Jang but on the freedom of expression.

The PPP being the champion of democracy and freedom of expression should take prompt action against the attackers besides ensuring that such incidents do not happen in the future.”Zulfiqar and Zaidi said that the media has already been under siege for some years. “In these testing times, media need support from political parties and various circles of the society. If any party or community has complaint against any content, then there is a mechanism to lodge a complaint and get the matter sorted out but the attackers resorted to fascist tactics to vent their anger.” The PFUJ leaders said that they expressed complete solidarity with the Geo and Jang. “We cannot leave the workers of Jang Group alone in these testing times and would like to make it very clear that the entire journalist community is behind the workers of this media outlet.”

Meanwhile, Sindh Information and Local Government Minister Syed Nasir Hussain Shah has condemned the incident of hooliganism and vandalism at the offices of the Jang Group and Geo Television in Karachi on Sunday.Talking to media persons outside the Jang and Geo TV offices after the attack on Sunday, the Sindh information minister said that strict action would be taken against whosoever was found involved in the incident.

He said that an entire institution could not be held responsible for the act of an individual. He mentioned that the Geo TV had instantly apologized for the remarks after they went on-air.

He appealed to the protesters doing protest against the remarks to end their agitation. Meanwhile, Sindh Law and Environment Adviser Barrister Murtaza Wahab, who also acts as the spokesman for the Sindh government, said that the Sindh CM had ordered a probe into the incident of attack on the offices of Jang Group and Geo TV.

While condemning the incident, he said that due action would be taken against the attackers for bringing them to justice.

Barrister Wahab said that the security of the offices of Jang Group and Geo TV and that of other media houses would be improved by the Sindh government. Meanwhile, Sindh Minister Jam Ikramullah Dharejo, Mukesh Kumar Chawla, Shehla Raza, and Special Assistant to Sindh CM Syed Qasim Naveed Qamar also condemned the attack on Jang and Geo TV offices. The provincial cabinet members said that the Sindh government always stood for protecting the freedom of expression and media institutions would be given protection in this regard. Sindh Minister for Education Saeed Ghani also condemned the attack on the Geo and Jang office on Sunday and said the PPP believed in the freedom of expression and press. He added that the Sindh chief minister had assured action against the attackers.