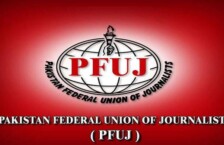 From Layoffs to Lashes, a compilation of 58 articles (36 in Urdu and 22 in English), vividly chronicles the fights waged by the Pakistan Federal Union of Journalists (PFUJ) over the last 70 years to protect and promote press freedom and the economic wellbeing of working journalists; and in between trying to prosecute cases of lives lost to crossfires or victims of targeted killings but invariably failing to reach the smoking guns.

While reading these precious pieces of PFUJ’s history one cannot but experience a mixture of admiration, pride and even jealousy over the way some of our colleagues fought these battles. And in between the lines one can also read in this narrative large doses of a more authentic version of this country’s history than what the officially certified history books tell.

Seemingly akin to a labour of love of four dedicated scribes — Mazhar Abbas, Nizamuddin Siddiqui, Waris Raza and Faheem Siddiqui — the PFUJ’s publication unifies almost all factions of the union as it carries contributions from the representatives of all known and unknown PFUJs.

While the book’s narrative is a tale of a long-drawn resistance against suppression, Feica’s illustration on the cover and his choice of a somber colour-scheme depicts the true state of the media today.

For most of the time the PFUJ was led by some genuine intellectuals of their times. They could look in the eyes of the most powerful of rulers and force them to blink and simultaneously reinforce with their superior scholarships the backbones of the weakest of media owners to stand their ground against state despotism and non-state oppression.

Media is a public service industry, truth being its output vouched by the integrity and credibility of the personnel and the organisations that produce it. Not being a charity, it needs to earn its keep to be able to invest in meeting the demands of innovation and pay salaries to its expanding manpower. But in doing so you don’t have to sell your soul.

Ultimately, you have to be a person of integrity. In order to do journalism right, you have to have a soul and a spine. The soul means you have a strong sense of purpose, and the spine means you can stick to that purpose, withstanding pressures.

According to the practitioners of the profession, objectivity doesn’t mean neutrality, nor both-sideism. Fundamentally, it recognises that all of us have our preconceptions and we should try to set those aside as much as possible when we go about our reporting.

We take great care to ensure that what we publish in print and online meets a certain standard, one that reinforces our reputation for high-caliber journalism. We employ multiple layers of editors to ensure we meet those standards. When journalists post on Twitter or Facebook, however, no editors are involved. That means that journalists need to edit themselves. They need to continue meeting those high standards, just as they are expected to if they are on other media vehicles.

Today, everybody’s walking around with a mobile device. That’s where most people are now getting their information — and many are getting it from social networks as well.

People can get information from sources that affirm their pre-existing points of view. That’s the business model of some media outlets: to provide so-called “news”, and “information” that tells them that their feelings are right, their instincts are right, and that there are people just like them who think exactly like them. If people have suspicions, those media outlets reinforce those suspicions. They have no fidelity to the facts or to truth.

Once people start to think that way, it’s very hard to persuade them that they are disconnected from reality. They see mainstream media as the ones who are lying. They see themselves as the ones who possess the truth and those who are not reinforcing people’s pre-existing views of the world are seen as the enemy, as liars, as paid agents of their opponents.

Tough times are ahead for media as a public service industry and media professionals.