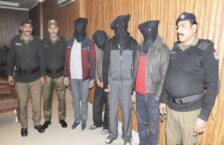 LAHORE : Four accused involved in the murder of a reporter of a private news channel have been arrested while two shooters are still at large, said the CCPO while speaking at a press conference at District Police Line Qila Gujar Singh here on Saturday.

The CCPO said journalist Hasnain Shah and accused Amir Butt had a monetary dispute. Amir Butt, his brother Shahid Butt and their friend Farhan Shah planned to kill the journalist.

He said police have obtained details of the two shooters and they would be arrested soon.

The CCPO claimed that incidents of robbery, looting, illegal seizures, vehicle snatching and theft have come down by 50pc during the last three months. He announced cash prizes and commendatory certificates for the police teams.