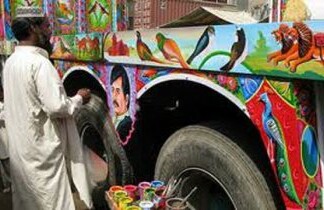 ISLAMABAD: The ongoing folk festival of Pakistan “Lok Mela” being held at Shakaparian under the aegis of Lok Virsa (National Institute of Folk and Traditional Heritage) is drawing in a large number of visitors, fascinated by the truck art presented here.

In the beautiful cultural pavilions erected at the festival, master craftsman Habib-ur-Rehman is seen actively demonstrating the skill of truck art. The 74-year old man has devoted a major part of his life to the centuries old craft tradition. He is not only keeping this art alive but is also transferring it to future generations. He has trained a group of young boys residing in his locality who are eager to learn traditional and modern techniques of making this unique art.

“This art fascinates people, especially women and children and they are buying small items as decoration pieces for their homes. They also buy them for gifting to others on various occasions,” says Habib-ur-Rehman.

Lok Virsa’s executive director Khalid Javaid said the purpose of inviting truck art painters at the festival is to revive this dying art.

“The colourful, sometimes dazzling, art work on vehicles and other means of transportation, which is found in abundance in Pakistan can hardly be seen anywhere else in the world. Decorations are not done only on trucks and buses but on all kinds of vehicles like tankers, mini-buses, trucks, rickshaws, tongas and even donkey carts moving on the road throughout the country,” he added.

Surprisingly, the artists and artisans involved in this special art are graduates from art schools or colleges. Yet they perform their incredible work skillfully, albeit in a naïve style; using their imagination and inspiration to create fantasies and dreams, the colours and embellishments of which are deeply rooted in Pakistan’s rich folklore.

Most vehicles are decorated from the top to bottom with no space left blank. The main themes of the paintings are dictated by the choice of the owners reflecting their cultural heritage and tastes. Designs created consist of geometrical and floral patterns, landscapes with lakes, rivers, waterfalls, snow covered mountain peaks, spring fountains, gardens, flowers, mosques, eagles, peacocks, fowls to mention only the main subjects.

Modern influence also manifests itself by depicting trains winding up mountain passes, ocean liners sailing through the calm seas, aircrafts gliding through a cloudless sky, even fighter jets and rockets and pictures of celebrated beauties.

Executive Director Lok Virsa further apprised that knowing the importance of this art, Lok Virsa has also created a full-fledged 3-dimensional diorama on truck art at the Pakistan National Museum of Ethnology, popularly known as Heritage Museum. A beautiful replica of the traditional truck driver’s hotel including food specially cooked and served to drivers can be seen at the display professionally designed by Lok Virsa.

Lok Virsa has also displayed a truck, complete with all decorations and slogans that are usually inscribed on the bodies of the trucks in Pakistan, in the transport museum located within the vicinity of Lok Virsa, he maintained. 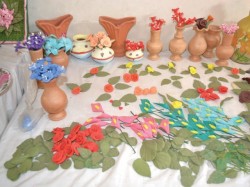