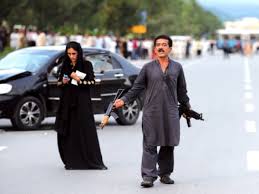 ISLAMABAD: It is going to be a very tough time for the media ahead, as the Supreme Court has admitted a petition for preliminary hearing against the media/all TV channels for telecasting the August 15 incident involving random firing on Jinnah Avenue.

A three-member bench of the apex court, headed by Chief Justice Iftikhar Muhammad Chaudhry, will tomorrow (Monday) hear a petition requesting formation of a judicial commission, consisting of some high-ranked retired military officers, to probe the August 15 incident and book those responsible.

It is worth mentioning that hearing the Balochistan target killing case on August 16 in Quetta, the CJP expressed resentment over the irresponsible coverage of private TV channels and directed the Pakistan Electronic Media Regulatory Authority (PEMRA) to take action against the management of those channels.

“The live coverage of Jinnah Avenue-like incidents is against the norms, and causes panic among the public,” the CJP remarked while criticising the reporting by TV channels on Friday.

Likewise, the SC on Saturday also decided to take up a petition, filed by Advocate Tariq Asad, who has prayed that action should be taken against PEMRA for allowing TV channels to telecast live transmissions of such terrorism against their code of conduct.

He has made the federation through the interior secretary, the Islamabad inspector general, the PEMRA chairman and the Islamabad chief commissioner as respondents.

He stated that on August 15, a person named Sikandar, accompanied by his wife and two children, wielding two semi-automatic rifles and a submachine gun (SMG), drove his car into the area after crossing all police checkposts and barriers at about 5:30pm and started firing random shots in the air.

He held the whole city hostage for more than five hours. The incident became a cynosure for the media as the episode began, and all TV channels ran live transmission from the spot.

The man used his wife, Kanwal, and two children as shields and demanded implementation of Shariah rule in the country and ouster of the incumbent government.

All the TV channels stopped the transmission of other programmes and started airing the actions of the armed, or as some say, “mentally retarded man”, which continued for hours until Pakistan People’s Party leader Zamrud Khan attacked him and the drama ended with a drop scene. He contended that all the channels continued telecasting the drama for more than five hours without any recess that spread fear, harassment and suspense in violation of Article 9 of the constitution.

He stated that inefficiencies of the interior secretary, the inspector general and the PEMRA chairman had caused disgrace not only for law enforcement agencies, but also for the state, particularly at a time when there were disturbances on the Indo-Pak border. He said that an impression that Pakistan was incapable to control a man with two guns raised questions about the country’s internal security.