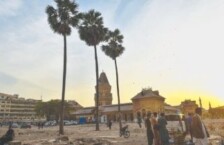 KARACHI: It seems that the hullabaloo created by those who seem to care a lot about Karachi’s historicity as soon as the anti-encroachment drive at Empress Market began has now subsided. Empress Market is still there, although these days it cuts a weary, haggard figure.

Everybody knows how old the market is and who made it. The interesting thing is that sometimes, because of our love for the past, we tend to attribute unconfirmed and unsubstantiated stories to it such as the one about the market being used as a place to shoot down mutineers in 1857. History requires corroboration. Perhaps Charles Ball’s books will confirm that it happened. Perhaps it didn’t. We don’t know.

Nature, and the love that it bestows on such man-made wonders, does not need corroboration, or that kind of corroboration. Let’s explain that: on the right side of the market (from where you can hop over to Rainbow Centre) there are five trees in an open space which are as integral to Empress Market as the shops in it. There are three palm trees, one neem tree and another whose type is hard to define. A shopkeeper, meat vendor to be precise, claims that these trees are at least a century old. He calls the three palm trees ‘brothers’. ‘They would be in one line so that they could define the alignment of the roads’

Again, it’s not easy to authenticate this piece of information. But by the looks of it, they appear to be old enough to tell us tales of the days of yore, of the time when Karachi was a quaint little town. But the barren ground on which the trees now stand speak volumes for the way this historic place has been taken care of. There’s not a single patch of green here.

Architect Dr Noman Ahmed says: “In colonial times, while landscaping buildings, they used to pay heed to the fact that the main view of the structure was not blocked. The palm or date palm trees were planted with a fair degree of planning. They would grow neem or bargad trees in the corners because they’re big, sheltering trees. If you think about it, there was wisdom in it. The trees would be in one line so that they could define the alignment of the roads [around the building].

“As far as their aesthetic value is concerned, palm tree branches created a lovely contrast with the yellow sandstone [of the built environment]. It accentuated the cloudy weather of Karachi,” Dr Ahmed says. Indeed, that would be the case. Today, however, what one notices is a scene that is in dire need of colour.