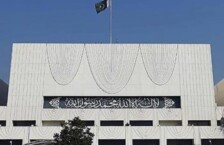 ISLAMABAD: A committee of the upper house of parliament will take up a privilege motion against Pakistan Television (PTV) on Monday for broadcasting the speech of a minister live without the permission of Senate Chairman Raza Rabbani.

The privilege motion against PTV — the first of its kind — is part of a four-point agenda of the Senate Committee on Rules and Privileges, headed by BNP-M leader Dr Jahanzeb Jamaldini, according to a copy of the agenda issued by the Senate Secretariat.

Mr Rabbani had issued a notice to the PTV managing director on Jan 1, asking him to appear before the committee to explain why the state broadcaster had telecast the Dec 31 speech of Defence Minister Khawaja Asif live, without his permission or prior intimation to the Senate Secretariat.

He also expressed displeasure that speeches delivered by opposition members after the minister’s speech were not broadcast.

Before issuing the notice, Mr Rabbani drew the attention of Information Minister Pervaiz Rashid towards an understanding reached between him and PTV officials that except for the question hour, the state broadcaster would not telecast live any part of house proceedings without his permission.

The Senate chairman referred to a ruling given by a former chairman, Nayyar Bokhari, that if PTV telecast live the speech of any minister on the floor of the house it would also have to telecast the speech of the opposition leader, if made immediately afterwards.

The ruling was given when opposition members interrupted the speech of Finance Minister Ishaq Dar and drew the attention of the house to the fact that PTV was telecasting the speech live. They had threatened to boycott the session if PTV did not broadcast the speech of Opposition Leader Aitzaz Ahsan as well.

Mr Bokhari had directed PTV to telecast live Mr Ahsan’s speech and the state-run channel had to comply.

For decades, the PTV would only telecast live speeches of the prime minister and cabinet ministers in parliament whereas the speeches of opposition members were blacked out. This practice continued even under the previous PPP government.

When contacted, PTV Managing Director Mohammad Malick said that they would appear before the committee and tell them that the speeches of opposition members were also telecast live after the defence minister’s speech. However, he said, the minister’s speech went on air on PTV News, whereas the other speeches were telecast on PTV National due to primetime constraints.

He said sometimes it was difficult for PTV to telecast all speeches live from parliament because of the channel’s commitments with advertisers. In such cases, they had the option to broadcast proceedings on other PTV channels.

The committee will also take up a privilege motion moved by MQM’s Maulana Tanveerul Haq Thanvi over the Rangers’ raid on his seminary, Jamia Ehteshamia Maddressah, in Karachi on Sept 19 last year.

Maulana Thanvi alleges that more than 250 Rangers personnel entered the madressah and the adjacent residential blocks and misbehaved with members of his family when he was in Saudi Arabia for Haj.