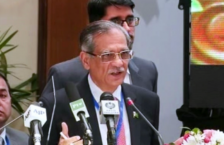 ISLAMABAD: The Supreme Court on Thursday withdrew its notice issued to Jang Group on gross misreporting of court proceedings after accepting the unconditional apology of the management and disposed of the matter with a warning to remain careful in future.

Chief Justice of Pakistan Justice Mian Saqib Nisar the other day had taken suo motu notice of the misquoting of Jang Group with headline ‘Govt lacks capability, planning’ in the News and Daily Jang and issued notices to the Jang media group, its editors, printers and publishers on gross misreporting of court proceedings. The court was hearing a case regarding illegal construction and encroachments in Bani Gala.

The chief justice had directed them to appear before the bench on November 15 toexplain as to why action under the relevant law should not be taken against them.

In a press statement issued the other day, the Chief Justice had said that the court never made such observations about the Federal Government, in fact some observations were made against the Capital Development Authority (CDA).

It is pertinent to mention here that almost all the TV channels reported that the honourable court made remarks against the government and the next day (Wednesday) a large number of newspapers reported the same news item that was reported in the newspapers of Jang Group.

The CJP observed that reporters of Jang Group do not come to the court and take news from others. “Do you want institutions to clash with each other,” Justice the Chief Justice asked Hanif Khalid. The CJP said that incorrect remarks were attributed to him.

Hanif Khalid however, submitted that the Jang Group respect the apex court in high esteem adding that the said news was not published only by Jang and The News but also published and aired by other media houses and channels and he is submitting the whole details in this regard as to which newspaper and TV channels has run the said news.

“Forget about other organisations but talk about your own organisation”, the CJP told Hanif Khalid adding that Shahzeb Khanzada and other anchors were asked to sit on Geo conducting programmes to create rift among the institutions.

“Whether the news you have published and aired fulfill the principles of journalism,” the CJP asked Hanif Khalid.

Justice Ijazul Ahsen observed that different programs were conducted by Geo wherein it was mentioned that the Supreme Court had expressed distrust over the government of Pakistan Tehreek-e-Insaaf (PTI).

The CJP also expressed dissatisfaction over the clarification, published by the Jang Group. Justice Ijazul Ahsen told Hanif Khalid that his reporter was not present in the courtroom during the proceedings of the said matter.

Jang Group senior journalist submitted that the reporter had been issued notice, seeking explanation from him in this regard. “I am with the court and seek unconditional apology”, he submitted.

Meanwhile, Sohail Khan, senior correspondent for The News went to the rostrum and expressed his reservations saying that he has been covering the Supreme Court’s proceedings for over ten years and has the credit to have covered high profile cases.

“I am deeply saddened over the court’s remarks that reporters of Jang Group do not come to the court and take stories from others,” Sohail Khan submitted.

He recalled that the honorable chief always admires the court reporters and been kind to them. “Sir we are also very much committed to our profession and always respect the court’s dignity as well as discharging their duties of court coverage with full responsibility and maintain accuracy,” he said.

He further submitted that although he did not file the said story but it was taken from the monitoring desk however, he said that before the publication of the said news item, it was aired by almost every TV channel repeatedly on November 13 in the evening, therefore he humbly submitted that if the court could have issued a clarification through its Public Relations Department, it could have been avoided by the print media as newspapers appeared the next day.

Sohail Khan further submitted that he has been rendering his professional duties while covering the sensitive beat of Supreme Court adding that he always get guidance and support of the learned lawyers, sitting in the courtroom whenever any confusion arises in a particular case.

He further said that he had covered the proceedings the other day of Bahria Town case and filed a detailed story, giving all the remarks and observation made by the honorable chief justice and other judges on the bench that was published in The News.

“Sir please point out any court story which I had ever misreported,” Sohail Khan asked the bench to which the Chief Justice with smiling face replied that he did not mention his name nor summoned him.

He submitted that he is determined to render his professional obligation while covering the country’s highest court with full commitment and dedication and will always respect the dignity of the court.

He prayed the apex court to consider the reply and apology of the Jang Group and as it did not ran the stories with any malafide intention.

Meanwhile, Hanif Khalid informed the court that they have issued show cause notice to their reporter Rana Masood Hussain, asking him to submit his reply within four days adding that in the light of his reply, he will be proceeded with departmental procedure.

He also submitted reply on behalf of Jang Group and the court after accepting its unconditional apology, withdrew its notices, issued to the Group and its Editors, Printer and Publisher and disposed of the matter with warning to remain careful in future.

Earlier in its reply submitted before the court, the Jang Group offered apologies for the inadvertence and with feeling of remorsefulness, undertake to be careful in future and requested that the matter may be disposed of without further action.

Editor, Publisher and Printer of Jang Group submitted that on November 13, 2018, the Honourable Chief Justice of Pakistan made some remarks during a suo motu hearing which have been reported differently by different newspapers, news agencies and television channels.

However, this morning as soon we learnt through TV channels that Daily Jang and The News has published the observations of Honourable Supreme Court wrongly, we immediately started our investigation and found that many other newspapers have also quoted the honourable chief justice as saying that “the government lacks capability and planning”.

It contended that the story released by at least four news agencies also attribute the same remarks to the honourable chief justice.

Similarly, the Jang Group submitted that ARY News and many other channels also highlighted the same point in their tickers and headlines that “the government lacks capability and planning”.

“Geo was not the first TV channel to air tickers with this point,” it submitted. It further submitted that the reporting of the remarks is outcome of confusions injected by different sources including news agencies.

“We have issued notices to Supreme Court Reporter of Daily Jang and Senior Edition Incharge of The News who had prepared this news for their newspapers,” says the reply, adding that they were not present in the court at the relevant time and prepared the news after obtaining it from other sources and believing the same as true.

Jang Group regrets inconvenience and botheration caused to the Honorable Court upon reporting of these remarks in said manner with deep sense of purpose,” says the reply.

The Jang Group offered apologies for the inadvertence and with feeling of remorsefulness, undertake to be careful in future. “That in light of above submissions, with utmost humility and reverence it is requested that the matter may be disposed of without further action,” the reply concluded.