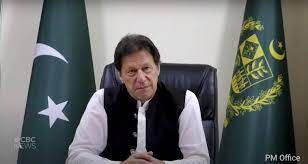 Pakistan Prime Minister Imran Khan has urged strict action online hate as he believes it to be the root cause of growing Islamophobia across the world.

Websites and content spreading hate divide humanity. Social media is growing by the day and the world is just coming to terms with it, he said in an interview with Journalist Rosemary Barton, the chief political correspondent of Canadian Broadcasting Corporation. The interview aired on Sunday.

“There needs to be an international action against it,” he remarked without giving more details on the type of action he expects from other countries. The premier said that he is focusing on bringing countries together so that they could hold discussions on it. Unfortunately, world leaders don’t have enough motivation to counter the hate against Muslims and Islam. “It is because they don’t understand this themselves.”

He went on to say that he has studied in the UK and lived there. “I understand the western culture and understand its problems. I know why Islamophobia spread so quickly post 9/11.” After the attack on the twin towers, leaders across the world condemned it using the terms such as “Islamic terrorism” and “Islamic radicalism”. When such terms become common, they give the wrong impression of Islam. “People on the streets don’t understand the difference between moderate and radical Muslims.” They think that all Muslims are the same way and this fuels Islamophobia, he explained. “Terrorism has no religion and there are extremists in every society.”

He added that Muslims living in Western countries suffer from Islamophobia. Many of the cases aren’t even reported and we hear about them from our embassies.

Barton then asked for his comment on Quebec’s law that bars civil servants in positions of authority from wearing religious symbols at work. She remarked that Quebec authorities say that they believe in secularism.

PM Khan remarked that this is a form of secular extremism. The whole idea behind secularism is you want humans to be free to be the way they want to be as long as it doesn’t hurt anyone.

“Why is it such a big issue if someone wants to cover their head?” The main problem is the way Islam is perceived by western countries. Muslims must unite to make people understand the importance of their religious teachings. “People objecting to others wearing religious symbols is quite bizarre.”

The premier, however, dodged the question when asked to comment on the atrocities against Muslims in China’s Xinjiang province.

He said that he just wants to clarify that he speaks out against Islamophobia because he is lived in the UK and understands what Muslims living there go through. There are political problems and suffering in Syria, Iraq, and Somalia and that must be condemned.