‘It was a political strategy to make Pakistan conservative’ 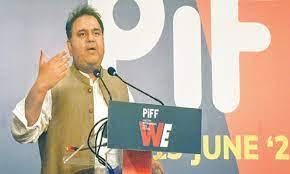 KARACHI: Federal Minister for Information and Broadcasting Fawad Chaudhry has said that Pakistani films suffered a decline after the Soviet Union invaded Afghanistan. Pakistan was turned into a conservative society through a thought-out conspiracy.

He said this while delivering his keynote address on Saturday on the second day of the 3rd Pakistan International Film Festival (PIFF) at Frere Hall.

The minister began his speech by mentioning Sadequain’s mural in the hall where the event was being held. He emphasised the kind of work that the late artist did require love and passion. Since this year’s festival is called Women’s Edition, he pointed out that for thousands of years men have had the upper band (bartari) over women because the world was ‘physical’. With the advent of technology, the difference between men and women is no more. His own daughter wants to become a fighter pilot. “This is how the world has changed and this is how the disparity between the sexes is ending.” However, in that regard, he admitted, we are lagging a bit behind the world.

Expressing his views on the decline of the standard of films in Pakistan after the 1980s, Mr Chaudhry said there are multiple factors for it. The biggest of them all was when the Soviet Union invaded Afghanistan. “Countries move up or go down together. Films, television and culture progress in countries that themselves are progressing because it’s the political environment of a country that decides whether it will move forward. Although the Soviet Union didn’t ask us before invading Afghanistan, we had to bear the consequences. In the 1960s and ’70s Pakistan’s was a progressive society; but in the 1980s a syllabus was made in Nebraska University for madressahs in Pakistan. It was part of the plan by CIA for the Great War in Afghanistan. It was a deep political strategy to make Pakistan conservative. After the Geneva Accords, they packed their bags to leave Afghanistan. We were left to deal with the mess in Afghanistan.”

The minister said that as a result of that mess a big chunk of our population became militarised. Gradually our liberal society moved towards extremism. When you opt for extremism, your ideas don’t remain forward-looking. “The way Narendra Modi is turning India into an extremist society, you’ll soon see their film and TV will be affected by it.”

Mr Chaudhry said culture and art are sensitive disciplines. Unless the ruling government provides an enabling environment for them, these disciplines will not move ahead. “We have the opportunity to create soft power. The way to do it is to come up with our own commercial models … Our problem is that our competition is with much bigger powers than us. For example, there are lobbies that don’t allow Pakistani content to run on Netflix despite the fact that our content is very good.” In order to find other avenues, he mentioned our Turkish brothers [for joint ventures] and China.

Mr Chaudhry urged Pakistani film-makers to focus on Turkey, the Middle East and Saudi Arabia. Saudi Arabia, he mentioned, as part of its Vision 2030 is going to make 2,000 cinema houses. “So, we will have a huge new market.”

He said the government is coming up with a film policy. Among other things the policy entails to lessen the electricity charges for cinemas. And then there will be zero taxes on the film industry. Also, film-makers (with 45 years age limit) can go to the government for their projects and the government will give them a loan of Rs50 million.

The minister then talked about the government’s intention of making a Pakistan Media University that will have up-to-date courses on journalism and other media. In the end, he claimed that the next 10 years is the period of Pakistan’s progress and development.

Earlier, the day began with a panel discussion moderated by Sidra Iqbal on the opportunities and challenges of Covid.

Javed Jabbar said the old ‘normal’ still applies. Take the status of women in Pakistan, for example: on the one hand, there’s tremendous change and improvement; and on the other millions remain oppressed. And “this is not fully reflected in our cinema and television”.

On the question of the changing times and its effect on films, Mr Jabbar said the magic of cinema will never go.

Fizza Ali Meerza said the common man should have access to the cinema.

Duraid Qureshi said cinema’s experience is totally different from that of watching a video on a mobile phone. When you go into a cinema hall, you’re experiencing something with many other people.

Dr Fouzia Saeed said our younger generation is already familiar with digital platforms through video games etc, but her generation took time to get used to it.

Ameena Saiyid said we have great writers in our country. She acknowledged the use of technology in Covid times, saying that she took part in a session at the Jaipur Literature Festival sitting in her home.

Dr Farah Essa said the women that were present in the hall on Saturday were inspirational individuals.