PPF alarmed by registration of cases against four journalists 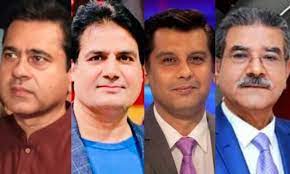 Pakistan Press Foundation (PPF) is concerned at the registration of cases against four journalists — Sami Ibrahim, Arshad Sharif, Imran Riaz Khan and Sabir Shakir. These cases registered on sedition and defamation charges are a concerning attempt to police members of the media and restrict their ability to report freely. We urge the relevant authorities to respect the freedom of the press in its entirety without bias in support of certain journalists or anchorpersons.

A criminal complaint was registered against BOL TV’s anchor person Sami Ibrahim for “making false allegations, attempting to seduce a security employee from his duty,” Dawn reported on May 20.

This came after the Federal Investigation Agency (FIA) on May 8 initiated an inquiry against the senior anchor person for “transmission of anti-state videos and statements on various social media platforms”.

Cases have also been registered against ARY News journalists Arshad Sharif and Sabir Shakir and Express News host Imran Riaz Khan. As per Dawn, the cases against were registered for  “allegedly criticizing state institutions and abetting mutiny”.

This is a very concerning trend being used to threaten and silence journalists who are considered to be supportive of the recently ousted former prime minister Imran Khan. We urge the relevant courts to quash such cases which appear to be a tool to target specific members of the media. The registration of cases is a tool that was used under the previous government and has continued with the transition in power. Regardless of who is at the helm, ensuring the media’s right to cover political developments without intimidation — physical, online or legal– must be guaranteed.

We are also concerned at reports of disruptions in the broadcast of ARY News tv channel. As per ARY, their broadcast has been stopped in parts of Pakistan. Social media users have also complained about a change in the location of the channel on cable networks to later in the series.

This is also an old strategy from the playbook of restricting press freedom in Pakistan and other networks like Geo have been targeted and financially impacted. It is a worrying repeat of history and will be detrimental for the overall freedom of expression in Pakistan.

We urge the relevant authorities to ensure cable operators air the network in all areas of the country without any disruptions or relocations.
End/PPF