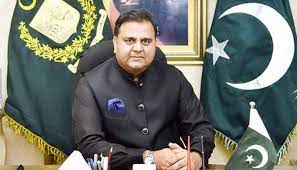 ISLAMABAD   –   Minister for Information and Broadcasting Chaudhry Fawad Hussain has said that PTI government firmly believes in fundamental, democratic and constitutional right of freedom of expression. He said this in a statement on Thursday, felicitating the newly-elected office-bearers of Parliamentary Reporters Association. The information minister said an independent and vibrant media is indispensable for a strong democracy and promotion of democratic norms in the country. Fawad said that addressing the problems of journalists and their welfare, security and protection of rights are included in govt’s priorities. Later, Minister for State on Information and Broadcasting Farrukh Habib said Prime Minister Imran Khan highlighted the case of Kashmir in best way.  He said Maryam Nawaz and Bilawal Bhutto even did not visit of Kashmir before elections. He mentioned that PML-N exploited the Kashmiri People’s emotions and PLMN leader invited Indian PM Modi on personal programs. He said former PM Nawaz Sharif visited Indian but always avoided to meet Hurriyat leaders during his visits. He said Pakistan Thereek-e-Insaf will form government in Kashmir as like Gilgit Baltistan. He said recorded development projects have been started in GB. He said the appeals of Nawaz Sharif have been rejected and he is an absconder.