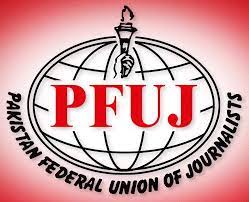 Addressing the opening ceremony, PFUJ President Sehzada Zulfiqar said that “it was a matter of great pleasure for the journalist community that today we are unveiling the Gold Medal Award named after Nisar Usmani, Pakistan’s seasoned journalist and pioneer of journalism.” “Nisar Usmani, has earned a name as he was reputed and unbiased personality in journalism, who dedicated his life to the rights of journalists,” the PFUJ president said, terming him one of the founders of the trade unions in Pakistan.

Expressing his gratitude to the Balochistan international Think Tank and Society of Earth Friends for naming the award after Nisar Usmani, the president PFUJ hoped that novice journalists would follow the footsteps of their senior journalists and help society prosper. Speaking on the occasion, Chairman of Balochistan International Think Tank Owais Jadoon said that he feels pride naming the award after the renowned and well reputed journalist of the country.

He noted that in the first phase, a three-year long award starting in 2022 will be given to the journalists who have rendered outstanding services in the field of journalism. The awards giving will be initiated from Balochistan and for the purpose the selection committee consisting of senior journalists has been formed.

“The committee formed will send its recommended names for final selection,” he said, adding that after the inaugural award from Balochistan, the award ceremonies will be held in the rest of the provinces of the country. However, the main ceremony will be held in Islamabad wherein foreign journalists will also be invited.