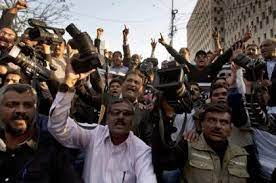 BARA: Journalists of three press clubs in Khyber district, political leaders and social activists staged a protest on Monday at the Khyber Chow in Bara to demand the release of Khari Khan, a former president of Bara Press Club.

The protesters also staged a march from Bara Press Club to the Khyber Chowk.Speaking on the occasion, speakers asked the government to release Khadim Khan Afridi and set up a judicial commission to investigate the incident of the arrest.

The protesters added that the Counter-Terrorism Department was established to bring the culprits to justice but the department was used to arrest innocent tribesmen in fake activities.The speakers believed that the Khyber district police had failed to provide security to the journalists and public in Bara.

Later, the journalists said authorities should apologise to journalists for this act.They expressed frustration over the role of lawmakers including MNAs, MPAs and senators who did not show any solidarity with the journalist community.The speakers announced that journalists would continue to boycott the coverage of activities of lawmakers and police.