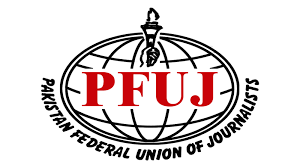 ISLAMABAD: G M Jamali President Pakistan Federal Union of Journalists (PFUJ) and Secretary General Rana Muhammad Azeem on Tuesday (23rd of August, 2022), while condemning the  manhandling of Bol News Anchor Jameel Farooqui by Police, maintained: “Police must follow the law of the land if someone has committed a crime. If Farooqui must be charged all proceedings should be carried out properly. We completely condemn any illegal arrests or assault of any Media person, this abuse of power will not be tolerated.”

IFJ held: “The IFJ urges the Pakistani authorities to withdraw the charges against Jameel Farooqui and to cease the concerning harassment and intimidation of media workers without justification. The fundamental rights to freedom of expression and freedom of the press must be protected in Pakistan.” Pakistani state authorities have detained Bol News journalist Jameel Farooqui, following accusations of anti-state statements posted to his YouTube channel. IFJ and its affiliate PFUJ urge the government to withdraw the case against Farooqui and protect Press freedom.

Farooqui was charged following a First Information Report (FIR) registered on 21st of August by magistrate Aimal Khan at Ramna Police Station, under several sections of the Pakistan Penal Code (PPC) relating to defamation and the obstruction of public servants. The FIR stated that Farooqui’s reporting on police conduct was tantamount to interference with the case. Farooqui, a YouTuber and anchor at Bol News, was arrested the same night while leaving the Bol news office.

Farooqui commented on the treatment of PTI leader Shahbaz Gill by law enforcement, alleging that members of the Islamabad Capital Police (ICP) sexually and physically assaulted Gill during his August 9 arrest. The Islamabad Capital Police have in turn alleged that Farooqui made false accusations against law enforcement. On 22nd August, Karachi’s District and Sessions Court granted Islamabad police a three-day transitionary remand of Jameel Farooqui and ordered police to inform Farooqui’s family of his whereabouts.

In a video posted to social media on 23rd August, Farooqui can be seen handcuffed at Karachi’s Jinnah International Airport, accompanied by an Islamabad Police official. Farooqui claimed in the video that he was beaten after having his clothes stripped off. On 21st August, the Pakistan Electronic Media Regulatory Authority (PEMRA) banned live speeches from former Prime Minister Imran Khan. PEMRA has blocked the transmission of pro-Imran Khan news organisations, including ARY News on 10th August and Farooqui’s network Bol News on 22nd August.