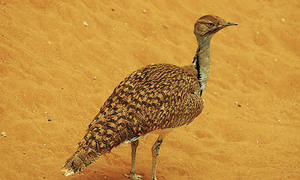 ISLAMABAD: The Supreme Court reserved its order on Friday on the government’s review petition against a verdict banning the hunting of houbara bustards.

Advocate Syed Ali Zafar, who represented some people affected by the ban, withdrew their petition after a member of the bench said it could not be taken up during the review of an earlier order.

The lawyer, however, argued that hunting was a conservation tool and 42 international conventions allowed limited hunting of protected species.

Justice Qazi Faez Isa said no state could permit hunting of the houbara bustard because it was migratory bird. Advocate Kamran Murtaza said the matter could not be re-heard because the scope of the review was limited.

He said the petition could only be taken up by the bench which had imposed the ban. Justice Saqib Nisar said the judge who had authored the judgement was among the members of bench.

The Sindh government had informed the bench on Thursday that the court’s order banning the hunting was not implementable. The provincial government’s counsel Farooq H Naek argued that hunting was permitted for just 10 days.

Earlier, Attorney General Salman Aslam Butt had contended that the government was not opposing the whole verdict, but seeking permission for some sustainable form of hunting the bird.