LAHORE: The passport and immigration department has introduced an electronic system to rid people of corruption and exploitation by its staff, enabling them to get their passports within the stipulated period without any hassle.

The steps have been taken after finding all efforts to streamline the system derailed by none else but the corrupt among the staff in the field and offices. Many officials were found not delivering the prepared passports to the applicants, forcing them to either grease their palms or contact touts to get the needful done.

In a number of cases, relatives and friends of staffers were found acting as touts, getting bribe to deliver passports to people which they were denied at the official counters under one pretext or another.

Giving details of the steps aimed at overhauling the system and checking the mafia, Immigration and Passport Director General Sikandar Sultan Raja informed Dawn here on Sunday a helpline — 0800-34477 – with three toll-free numbers had been established to provide updated information to the applicants.

Accessibility to public was also being ensured via IT-based tools. All officers of the passport directorate general, in-charges of branches and all regional offices had been connected to each other and to the public through email.

Email addresses of all in-charges of regional passport offices had been developed at the head office, making them duty-bound to receive complaints and queries and reply the same.

“Now, the public can approach me and every other officer through email. It has been ensured that public gets a response from the officers concerned through email and a mechanism of random checking has been developed to ensure this facility to the public,” he said.

He said a dedicated web-based mail system of the directorate general had also been activated and now all officers at the head office and field were in contact with each other through it.

He said the MRP/MRV System Audit Wing had been activated recently. It is a technique of identifying system-based flaws deviating from the policy prescribed by the regulators at the time of designing any system. The prime objective was to minimise levels of threat of wrongly or fraudulently obtained passports through computer-based issuance system. “This system has helped the authorities in identifying fraudulently obtained passports and suspected cases, besides proper execution,” he said.

He said the public-support services had been enhanced through the newly-established facilitation desk at the headquarters. This had not only helped the department address grievances of the people visiting the head office from far-flung areas but also in getting feedback from them about the working of their regional passport offices and to take corrective measures if and when required.

The administrative steps taken to improve the system included surprise inspections by the DG and other senior officers of the department, initiation of disciplinary proceedings against the inefficient and corrupt officers, rationalisation of staff keeping in view only workload of the field offices and enhanced accessibility of the senior and middle management. Another step to achieve this objective was use of information technology for periodic management reports. There was no such system of report generation in the department as computers were being used merely as typewriters.

He said the reports being generated in real time were data entries being made at the regional passport offices about every step of passport making and issuance. Through it, the top and middle management at the head office could take corrective measures immediately as this information was transmitted to them in real time. Through these reports, he said, it had become easy to assess whether work at regional passport offices started in time, how many data entries had been made at a particular office, at what time the data entries had been stopped, all the data entered had been transmitted to the head office (or some cases had been withheld for ulterior motives), how many passports had been delivered on a particular day at a particular office, how many had been printed at the central production facility and whether all of these had been dispatched to RPOs.

He said short message service (SMS) for tracking passports was also being launched in a week’s time. It would allow applicants to track their passport by sending an SMS of their receipt/token number to a dedicated four-digit code. This would help simplify the process of receiving passports, saving the applicants the hassle of repeatedly visiting the office for the purpose.

He said the service for home delivery of passports would soon be started as a pilot project in six cities — Islamabad/Rawalpindi, Lahore, Karachi, Peshawar, Quetta and Muazaffargarh. This, he hoped, would save people from exploitation by the staff.

He said to attend to the increasing number of queries related to pre-processing and post-processing of passport applications, a state of the art call center was being planned. This would be an automated phone system offering a menu of choices to callers to respond to queries automatically round the clock. This, he said, would help decrease human intervention and the related flaws in the system.

There are 93 regional passports offices within and 32 outside Pakistan. The country was under international obligation to provide machine readable passport facility at all missions before November 2015, otherwise visas will be refused to Pakistani nationals living abroad having manual passports.

The total number of passports issued since 2004 (when machine readable passports (MRP) facility was initiated) is 23 million and the number of applicants on a daily basis is 20,000 approximately. So far, complete replacement of manual passports with MRPs has been accomplished within Pakistan while 77 missions abroad are still without it.

There are 15 customised departmental buildings in various cities and eight more are under construction. Mr Sikandar said it was being ensured that the buildings got completed soon to provide state of the art services to the public. In this regard, he said, with the assistance of housing and works federal secretary, offices in four cities — Mirpur, Abbotabad, Rawalpindi and Banu — would be completed within a month.

He said after recent clearance of backlog of 0.8 million passports, every citizen could now get an urgent passport within five days and the routine one within 12 days of applying.

However, he admitted, a lot of undelivered passports were lying in the regional passport offices, claiming that efforts were being made to deliver them to the applicants.

He asked such Pakistanis to contact him through his email, dg@dgip.gov.pk, or the concerned section in-charge through email (immigatation@dgip.gov.pk).

He said a huge backlog of cases of blacklisted applicants, multiple CNICs, multiple passports were pending. A majority of these applicants were carrying job offer letters from abroad but were blacklisted for minor offences. Only in last two months, 943 cases had been decided so that the applicants could go abroad to earn foreign exchange for the country. 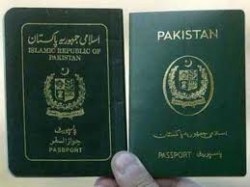