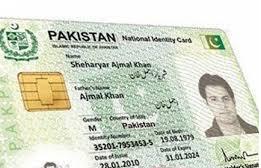 It is indeed a commendable step that NADRA has taken by introducing National Identity Cards with details in English and Urdu. The previous identity card exclusively in Urdu was of no use outside of Pakistan, with the introduction of English letters, this card will be accepted in most of the countries abroad. However, in my humble view, there are still a number of things that should have been included, or taken care of in the new CNIC. The first thing is to incorporate blood group. The new computerized driving license does mention the blood group, however, the CNIC must also include blood group as not everyone may have a driving license on them.

Secondly, the size of fonts makes the card illegible for those having weak or impaired eye sight. A lot of space has been left unused in the new CNIC and that space can be used for increasing the font/size of the letters. The name and identity cards number, at least both of them, should also be written in Brail system so that blind people can at least know these two things when they hold a CNIC.

The photo used is in black and white, black and white photos are used to mask the true features of one’s face that is the reason; the fashion industry also uses black and white or ‘sepia’ style in photography which enhances some of the features while hiding some others. A colored photograph shows the real features. Therefore NADRA should use colored photographs and increase the size of the photos as well. The new card may also have the thumb impression on it in a visible and large size to further provide security features to its cards. The thumb impression had been there in previous cards but now it’s been done away with. NADRA could still revise the layout of the new smart CNIC and benefit the general public.