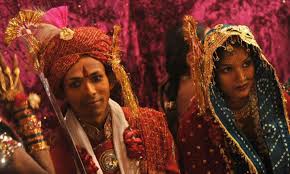 KARACHI: From rights of non-Muslim women to marry the men of their choice to invoking their right to marry for the second time, many queries were tackled at a consultative meeting conducted by the Sindh Rural Partners Organisation on Tuesday with an aim to incorporate suggestions from the stakeholders in a draft bill.

The main discussion was focused on invoking the newly drafted Non-Muslim Marriage Bill, 2015 and to get input from the people of the minority groups. The draft bill is being prepared and discussed so that it can be taken up in the national and provincial assemblies.

Apart from community members and an SRPO team, representatives of the Pakistan Peoples Party, the Muttahida Qaumi Movement and the Pakistan Muslim League-Nawaz also attended the meeting. But most of them left early citing some other meetings that they had to attend.

Barrister Zubair Abro presented the main features of the draft bill explaining that it was aimed to have consolidated regulations with regard to marriage, divorce and custody of children, belonging to the people from the minority groups. It did not focus on the rituals followed by any minority group, he said. “We are not interfering in any religious ritual, which is left for the communities to decide. There’s a clear bifurcation in what we are preparing to present in the assemblies later,” he added.

Traditionally, there has been a Christian Marriage Act, 1872 and Christian Divorce Act, 1869, but no other community had a marriage act of their own, Barrister Abro explained. This made many people from the community to rely on the religious institutions of their own to provide certificates of their marriages. According to the bill, drafted by the SRPO consultants and spearheaded by Barrister Abro, the age of the girl or boy getting married should be 18 or above, and that they are able to give their consent.

The marriage will then be registered by a registrar, who should be a public servant, appointed by the Sindh government. The draft says the marriage will commence according to the rites and rituals agreed upon by them and solemnized in a place of worship of their choice. The certificate issued by the registrar will then be submitted to the National Database and Registration Authority (Nadra) and the document issued henceforth will be a public document. In case, the registrar fails to register the marriage within three months, a penalty of Rs100,000 will have to be submitted by him/her. Punishment of three years is also added in case a person files false information and the punishment exceeds to seven years in case of impersonation.

In order to annul a marriage, a couple would have to file a petition in the civil court on which the court will decide within three months. On this point, there were recommendations by some people in the audience that the custody of the children in case of a divorce should not be left on the judge to decide. It should be decided by the couple, it was suggested. One of the female members from the audience said that a clause should be added in the marriage certificate where a woman is allowed to remarry if her spouse dies, because as per the Hindu rite a woman is not allowed to marry again. Another suggestion was related to share in property after separation.

SRPO executive director Zahida Detho said: “There is an urgent need of a bill such as the Non-Muslim Marriage Bill since the insecurity faced by the communities is growing with every passing day.” As a next step, she said, they would focus on religious leaders and elders belonging to the non-Muslim communities to better understand their grievances and to include their input in the draft bill to be presented before lawmakers.