The meeting decided to propose that both electronic and print media would be approached to play their due role to achieve the target of National Action Plan in the national cause, creating awareness among the masses about the spirit of PAP/NAP and to disseminate message of harmony, peace and brotherhood by why of short service messages (through cellular companies), in house channels of cable networks, FM radios and articles/columns in print media, establishing a ‘Media Hub’ to get the PAP/NAP implemented under a condusire environmax for counter-terrorism. 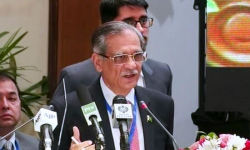