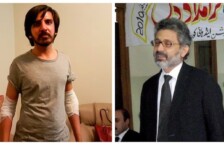 ISLAMABAD: Justice Qazi Faez Isa and his wife Ms Sarina Isa on Thursday paid a visit to express solidarity with journalist Asad Ali Toor, who was recently injured after unidentified suspects broke into his apartment and beat him up.

Justice Isa and his wife visited Mr Toor with a bouquet and painkillers to inquire about his health. In response, Mr Toor expressed gratitude for their gesture and for the love and support he received from people, especially the journalist community. Justice Isa and Ms Isa prayed for his safety and wellbeing.

Islamabad police has registered a case at the Shalimar police station under PPC 452 and 506 (ii) in response to a complaint lodged by Mr Toor. The attack on the journalist was immediately condemned by the journalist fraternity, lawyers as well as politicians with several of them demanding that inquiry into the incident should be made public.

Meanwhile in a joint statement, Pakistan Federal Union of Journalists (PFUJ) President Shahzada Zulfiqar and Secretary General Nasir Zaidi said this was the second time that the journalist had been beaten. They said that this attempt was aimed at suppressing journalists.

“Such tactics will not deter media and journalists from upholding free press and freedom of speech and expression,” they added. The PFUJ demanded immediate arrest of those involved and initiation of investigation by a judge of the high court. They also warned of countrywide protests if concrete steps were not taken for the arrest of those who attacked Mr Toor.