In BBC interview, Fawad Chaudhry claims attacks on journalists have ‘reduced’ in Pakistan 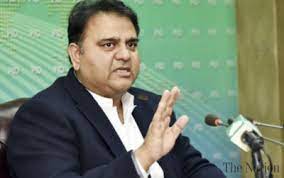 Minister for Information and Broadcasting Fawad Chaudhry has claimed that attacks on journalists have reduced in Pakistan ever since Prime Minister Imran Khan took over.

During an interview with Stephen Sackur for BBC programme “HARDTalk”, which was released on Friday, the minister, who was even termed as “one of the government’s most robust defender”, gave his utmost to negate the impression that journalists are at any more risk in Pakistan than anywhere else in the world.

When asked by Sackur if he agrees that the cornerstone of any democracy is the protection of freedom of expression and independent journalism, Chaudhry quoted Article 19 of the Constitution that guarantees such protection.

When further pressed to respond to incidences occuring “day after day, month after month” that stand in stark contrast to such freedoms, and that the government is not protecting journalists and freedom of speech, the information minister said he will “obviously contest the claim”.

“Pakistan is probably one of the freest state[s] as far as media is concerned. We have about 43 international media channels, including BBC, here in Pakistan, we have 112 private channels, 258 FM channels, and 1,569 print publications.

“So you can imagine the kind of media we have. The size of the media itself defies your claim,” Chaudhry responded by saying.

Speaking about the attack on journalist Asad Toor, the minister said that he sent senior police officers to investigate the case and they have obtained closed-circuit footage of the people involved and that “they will be apprehended”.

He went on to say that such incidents do happen “everywhere in the world, and Pakistan is no exception”.

Citing the assassination of former prime minister Benazir Bhutto in a terrorist attack, he said that it begs looking at things from a wider perspective.

The minister claimed that attacks on journalists have in fact “reduced” since Prime Minister Imran Khan took over.

He further said that “in most of the cases, the culprits were apprehended”.

Circling back to the attack on Toor and last month on journalist Absar Alam, he said that the investigation has not even concluded and so there is “no reason” to allege that Pakistan is not protecting its journalists while referencing these two incidents.