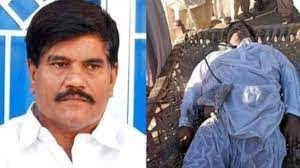 NAUSHERO FEROZ – Late journalist Aziz Memon’s widow has appealed for the immediate arrest of her husband’s killers and sought financial assistance to run her house and a job for her son. She has also appealed for fulfillment of the promises made by the provincial ministers and advisors to provide her justice and financial help. She said her financial condition was very bad and all their expenditures were being borne by her late husband’s elder brother. The deceased journalist Aziz Memon was the correspondent of a local regional newspaper and a news channel at Mahrabpur Tehsil of district Naushero Feroz, Sindh, who was murdered on February 16, 2020.  Late Aziz Memon’s widow said the provincial ministers and advisors had promised for the provision of job to her son but unfortunately not a single promise had been fulfilled so far. She appealed to the Prime Minister, Chief Justice of Pakistan, Army Chief and Sindh Chief Minister for financial support and justice. The deceased journalist’s elder brother Hafeezur Rehman said that he had requested the provincial ministers and advisors for provision of job to late Aziz’s son, who was an Engineer, but they were still waiting for a positive response.  He said they were running from pillar to post for the justice whereas the main accused was at large even after 19 months of the journalist’s murder. He alleged the police for not cooperating and using delaying tactics to bring the culprits to book.