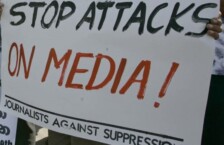 In its two recent reports the Pakistan Press Foundation (PPF) lists in detail how working environment is becoming increasingly repressive for independent media in this country. While physical attacks, including abductions and arrests, continued during the current year at least two journalists were killed for their professional work. Another trend has been to intimidate journalists on-line as a way of silencing them, in certain instances leading to abductions, beatings and registration of cases. As distressing as these details are the PPF reveals nothing new. For a while, the International Federation of Journalists and the Freedom Network have been ranking Pakistan as one of the most dangerous countries for the practice of journalism, where more than 140 journalists have been killed in the line of duty during the last three decades. Some of them fell while covering terrorist attacks or were killed for reporting on terrorism-related developments, but many were targeted by some known and not-so-unknown actors. Except in two or three cases, no perpetrator of these crimes has been formally identified, let alone brought to justice.

Unfortunately, successive elected governments, including the present one, have preferred to look the other way. Prime minister Imran Khan has on several occasions credited the independent media for providing him the opportunity to spread his message at a time his party lacked the resources to reach out to the people. But he has done little to protect and promote the freedoms that, according to his own admission, had helped him come to power. In fact, during his first visit to the US as PM in an interview at a think-tank he had claimed that the media in Pakistan is more free than in Britain, and that “it is not just free, it is out of control.” Little surprise then that under him the government has come up with several schemes to control the media, though to be fiercely resisted by all representative bodies of journalists and media houses. Cases of harassment, kidnapping, and even killings have also continued. As of September last year, the Federal Investigation Agency had registered cases against 49 journalists in what seems to be part of a harassment campaign. The ruling party may have nothing to do with any of these immoral and illegitimate actions. Unfortunately, however, it hasn’t taken notice of them. In fact, even when questions are raised about its responsibility to ensure safety of journalists, they are ignored.

Those at the helm need to understand that freedom of expression is a core value of democracy. A vibrant independent media plays a vital role in promoting good governance by pointing to acts of omission and commission of a government, its subordinate organisations as well as private groups. This is why it is known as the fourth estate – fourth pillar of the state along with executive, parliament and judiciary – in functioning democracies. Repressive measures are a black mark on the reputation of not only a sitting government but the country’s name in the comity of nations. The ruling elites must think beyond their narrow, transient interests and show tolerance for unfavourable reporting and critical opinion.