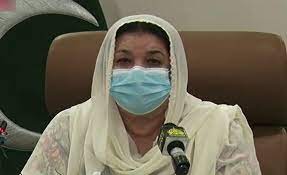 Addressing a seminar on ‘Role and Responsibility of Media in Measles Rubella (MR) Catch up Campaign 2021’ at a local hotel on Saturday, she said vaccination was the most cost-effective preventive intervention in public health.

Prevention, she added, was always better than cure.

The event was organised by the Expanded Programme on Immunization (EPI) with Unicef support.

Dr Yasmin Rashid said that Pakistan was going to organise the history’s largest vaccination campaign for children from Nov 15 to 27, adding that more than 46.6 million children of 9 months to 15 years of age would be vaccinated with daily target of over 3.7 million children per day.

She said that press was known as the fourth pillar of the state and it played a pivotal role in raising awareness on health issues.

“I appreciate the EPI programme for engaging the media and I am thankful to Unicef for supporting the government during this campaign.

“Only in Punjab, unvaccinated people constitute more than 85 percent of new COVID-19 hospital admissions. Elaborating the importance of vaccination, she said that significant decline was seen in positivity ratio in areas having high vaccination coverage. “Measles and rubella can be fatal and during my career as a doctor, I have witnessed rubella causing lifelong complications among mothers and children.

“The MR vaccine was available in the private sector, yet it was expensive and only affluent people could afford it, she added.

“Now we will be providing this vaccine to people free of cost.

“The minister said that in Punjab more than 52 per cent people have received at least a single dose vaccine, adding that the ‘Reach Every Door’ was also under way across the province.

The government was fully focused on prevention and taking fundamental steps to safeguard children lives through immunization. “Our children are the future of Pakistan,” she added.

Under the leadership of Prime Minister Imran Khan, revolutionary steps were being taken to improve the healthcare system in Punjab, she said.

In his speech, Director EPI Dr Mukhtar Ahmed explained the measles and rubella related complications and the shared background data for the introduction of vaccine. Unicef Health Specialist Dr Tahir Manzoor said that vaccines are introduced after long series of trials and approvals. In rare cases, some people might show mild symptoms. He said experts’ opinion must be sought before reporting such cases.

WHO technical officer Dr Nauman Khan said that the WHO had provided trainings to staff at provincial, district and UC level for any Adverse Events Following Immunisation (AEFI).