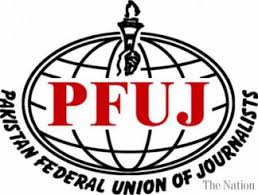 ISLAMABAD: National Press Club (NPC) was live with sentiments of love and respect for pride of journalism in Pakistan, Hussain Naqi. Senior and junior mediapersons clapped, embraced and adored him with shower of rose petals on his arrival. Naqi was the chief guest at the NPC in the reception organised by the Club as well as Pakistan Federal Union of Journalists.

Amidst thunderous applause and slogans of “Zinda hein sahafi zinda hein,” Hussain Naqi said that rendering sacrifices is a tradition of Pakistani journalists. He called for unity in trade unions in media industry.

He said that he had gone to the medical commission of Punjab after reading relevant laws. He reminded retired Justice Amir Raza of his old anecdote on which he lost temper. He said that we do not like the media to behave like it did in the turbulent year of 1971. He said that media owners have enough money to sustain the pressure and struggle jointly with journalists to win media freedom again.

Nasir Zaidi who braced lashes during Zia dictatorship said that Naqi is a commander of pen pushers and holder of flag of freedom of expression when censorship is in its peak in the history of Pakistan. He said that we will campaign and struggle for the rights to say and one day, the media will be independent in Pakistan.

Veteran journalist Nasir Malik said that inviting an icon of freedom of journalism and human rights is an honour for the NPC. He was a hero of the struggle then and is a hero even today. We learnt journalism and fighting for its independence from Naqi, Nisar Usmani, Minhaj Barna and others. He said we cannot repay the debt we owe to these luminaries. We want to give a message to powers which are bent upon eroding the hard earned freedoms. He said we all are Nisar Usmanis, Minhaj Barnas and Hussain Naqis.

He also condemned efforts in the name of Media Regulatory Authority where final power will rest with the government. He declared to prevent passage of this bill by launching a movement.

Mustansar Javed, former editor, Dateline Islamabad, said that we are going to face a worse period. We already lost half of the country. He said that we are witness that Naqi always stood firm on his Kalma e Haq before every Jabir Sultan wherever or whenever required.

Renowned poetess and activist Kishwar Naheed Apa said that an Urdu-speaking Naqi brought out a Punjabi daily Sajjan from Lahore. She congratulated Mr Naqi as well as the organisers. M Ziauddin, former Editor, The News, said that Naqi Sahib remained a source of inspiration whether we were students or in journalism. He said that Naqi taught us how to talk with rulers eye-ball to eye-ball. He said that the government earns bad name if it cannot ensure reach of all newspapers and channels in all areas of cities. He also urged the government to ensure safety and security of journalists. He called for unity in journalists to safeguard freedoms and rights.

Anchor Hamid Mir said that we can follow blindly after Naqi, Ziauddin and the like. There is no such person in politicians and judges, he said. Afzal Butt, President, PFUJ, said that we will not act as robots.

He quoted Asma Jahangir who had stated the bad time is ahead for journalism. Now the court does not allow even food from home for people in custody. He announced Hussain Naqi Award every year to a struggling newsperson from the NPC platform.

Tariq Chaudhry, President NPC, said that the strange treatment of an egoist gave new life to the struggle of mediapersons. He said that media industry has lighthouses like Naqi to guide us.

Fauzia Shahid, former Secretary PFUJ, said that Naqi has united journalism in Pakistan and we are thankful to him for this. Mubarak Zeb Khan said that media houses are being targeted financially by the powers that be resulting in retrenchment of journalists from newspapers and TV channels. He said that Hussain Naqi kept his tradition and his role rekindled the struggle of newspersons for their rights. 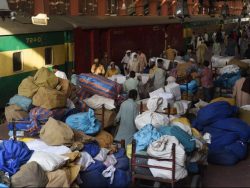