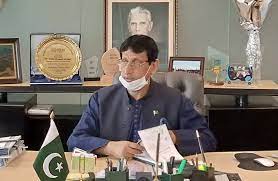 ISLAMABAD: Federal Minister for IT and Telecom, Amin Ul Haque on Friday called removal of capital gains from IT investors and exemption from sales and income tax filing “insufficient” for boosting the sector.

Ministry of IT and Telecom had shared a list of demands with Miftah just a day before the finalisation of budget 2022-23. In his speech, the finance minister did not accept the major demand of the telecom sector to reduce advance tax on mobile subscribers from 15 to 10 percent.

However, sources said that the second demand of IT ministry was fulfilled whereby they asked to reduce tax on locally manufactured mobile phone sets with a less than $100 price tag. Whil this was not mentioned in the windup speech, the Ministry of IT and Telecom high-ups seemed confident that this decision was made, and now they were trying to get its details from the Federal Board of Revenue (FBR).

The IT industry demand was accepted for exemption from filing sales tax and income tax statements.

An official statement issued by the Ministry of IT and Telecom on Friday said that removal of withholding tax and statement conditions from the IT industry were a good sign. It further said that the removal of capital gains tax from those who invest in the IT sector might be beneficial, but these measures were “insufficient”.

Haque said that in order to boost the IT sector it was necessary to take early decisions on all the proposals that the IT Ministry has sent to the Finance Department.

“It is important to ensure implementation of these declarations and issue clear directive to the FBR, so that there is no ambiguity.”

He said the FBR should understand the importance of the IT sector in the country’s economy as it was a major resource of foreign remittances, and thus “should not be unduly harassed”.

“Without communication facilities, how can we achieve targets from the IT sector, which depends entirely on the world and its international clients?” he asked. “As a minister, I am fully aware of the challenges facing the IT and telecom sector and cannot sit still until a logical solution is found.”

It should be recalled that the finance minister had announced in his address to the Parliament on Friday that the conditions of withholding tax and statement on IT industry have been abolished. Similarly, capital gains tax has been abolished on investors in the IT sector.