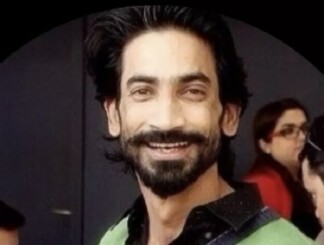 KARACHI: A journalist and social media activist reportedly went missing from the city’s Clifton area on Friday, while his friends and family claimed he was picked up by law enforcement agencies from his residence.

Arsalan Ahmed, who has remained associated with channels such as Geo, Abb Tak, Business Plus and A-Plus, is currently working as a freelance journalist and social media activist.

Arsalan’s wife Ayesha, in a video statement shared on social media, claimed that “14 to 15 armed Ran­gers personnel” entered their house at 4:30am on Friday and held the family at gunpoint.

They took away Arsalan in front of her and their children. She said when she asked where her husband was being taken and for what crime, she was told he was being detained for being vocal on social media. In the video, she urged the institutions concerned to look into the case and help recover her husband.

However, SSP Asad Raza told Dawn the police had not detained the activist. So far, Khan’s family had not approached them with a complaint, he claimed.

In contrast, Ayesha told Dawn on Friday night that she had visited the Clifton police station to register an abduction case, but the poli­­ce refused to lodge the FIR.

Meanwhile, the Karachi Bachao Tehreek (KBT), an alliance of various political and civil society organisations that Khan was a part of, expressed concern over the ‘abduction’ of their volunteer, and announced a protest against it on Saturday (today).

Khurram Nayar, the KBT convener, told Dawn that Khan was a volunteer with them. He alleged that the personnel of a law enforcement agency took away the activist from his apartment, close to the Russian consulate, in Clifton, at around 4am on Friday.

He alleged Khan’s family was also harassed, while the security personnel told his wife that her husband was being detained for being “too vocal”. They also took away his laptop and mobile phone. The KBT announced a protest on Saturday against the “enforced disappearance” of the activist.

Speaking at a news conference at the Karachi Press Club on Friday evening, the KBT and other organisations demanded the immediate release of their volunteer as well as the detained affectees of Sultanabad.

They also expressed concern over the Sindh government’s “illegal” drive to de­­molish the homes of poor workers in Gujjar Nala, Orangi Nala, Mehmood­abad, Haji Lemo Goth, Sultanabad and Surjani Town and deman­ded it be halted immediately. The KBT also demanded all the affectees be compensated in compliance with SC orders.

On the other hand, police sources said Arsalan Khan was previously an associate of the late MQM MNA Ali Raza Abidi, and had lately been quite vocal in his support for MQM London, as well as criticism of various sensitive agencies on social media.

The Karachi Union of Journalists (KUJ) conde­m­ned the ‘arrest’ of the social media activist and termed it a serious violation of the right to freedom of expression. They urged the authorities to take note of the incident.

KUJ general secretary Fahim Siddi­­qi and president Shahid Iq­­bal claimed Arsalan had been detained by law enforcement agencies. They conducted a raid on his residence in Clifton and took him away. The jou­rnalists’ body urged the army chief, chief justice of Pakistan, the prime minister and interior minister to take immediate notice of Arsalan’s “illegal detention” and ensure his immediate release.

Moreover, international rights organisation Amnes­­ty International also expr­e­s­­sed concern over Khan’s “abduction” from his home in Karachi. “Pakistan must end this abhorrent practice of punishing dissent by wre­nching people away from their loved ones,” Amnesty’s South Asia regional office tweeted.

It asked the newly appointed Inter-Ministerial Committee on Missing Persons to take note of the “jarring disconnect bet­ween what they are saying and what is actually happening on the ground”.