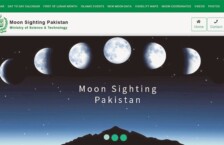 LAHORE: While launching Pakistan’s first official moon-sighting website and Hijri calendar, Minister for Science and Technology Fawad Chaudhry on Sunday announced that Eidul Fitr would be celebrated on June 5 according to the newly developed calendar.

An android application for moon sighting would also be available on Google Play store from Monday (today), the federal minister told the media at the launch of the website (www.pakmoonsighting.pk) at the Pakistan Council of Scientific and Industrial Research Laboratories Complex.

Mr Chaudhry said the moon sighting application information would be valid for five years. A number of departments collaborated to create the website and Hijri calendar, which was sent to the Council of Islamic Ideology (CII) before being presented in the cabinet meeting for approval, he added.

Mr Chaudhry said: “I personally believe there is no need to have Ruet-i-Hilal Committee in the country and a number of Muslim countries including Malaysia, Indonesia, Turkey, Egypt and others do not have it.” Only Saudi Arabia, the UAE and Pakistan had Ruet-i-Hilal committees while the UAE, too, had announced its ending, he added.

The minister criticised some ulema of Ruet-i-Hilal committee for opposing the use of technology for moon sighting and said if using technology for this purpose was haram then how it would be legal or legitimate to sight moon by wearing glasses and using binoculars. “If the committee wants to see the moon with naked eye, then sighting it with wearing glasses and using binoculars will also be haram under their claim,” he said.

Mr Chaudhry said the state should not enforce religious matters but it can “help in taking the matters in the right direction”.

He said moon sighting could be ascertained with the help of technology. The mobile application would benefit the Muslims living across the world, he added.

The minister also announced holding science conferences in all the four governor houses of the country and later a big conference in Islamabad and said he would invite renowned scientists of the world to participate in it.

He said the modern technology had changed the shape and structure of everything around us and this new 5G technology had brought wonderful ways to help humanity.

He also announced to establish 1,500 science schools in every province. “All these schools will be upgraded after provision of clean drinking water and installing solar panels enabling them to fulfil their energy needs,” he said.

The minister said he could sense that some countries had been planning to stop technological advancements and they were using religious people in this matter.

“Israel has been ruling the Middle East after bringing technological revolution in their country. Only this single country produces so many books that all the countries of the Muslim world could not,” he said.

Replying to queries about

NAB chairman’s video scandal, Mr Chaudhry said the act had damaged the accountability process and his party would soon decide the government stance over the issue.

He said PML-N leader Shahid Khaqan Abbasi’s demand for holding a parliamentary probe into the video scandal would also be reviewed.

He said the opposition did not have any strong narrative to bring people on the streets for protests against the government after Eid.

Both Bilawal Bhutto-Zardari and Maryam Nawaz were trying to save their parent, he said. He was of the opinion that a majority of senior PML-N leaders were not ready to work under Maryam’s leadership.

Mr Chaudhry said people were disappointed with the government for not taking measures to fulfil their election promise of eradicating corruption and bringing back the money stashed in other countries.

He said the government would have to take measures to ensure accountability of “corrupt political leaders” to win back public trust. “I had said Shahbaz Sharif would never return if government allowed him to go abroad. And now the public had started questioning them about his return,” he said.