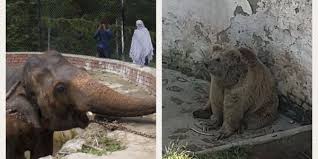 ISLAMABAD-Wildlife, especially elephant ‘Kawan’ at Islamabad zoo is in dire need of attention of the quarters concerned as it is being treated inhumanly, a wildlife expert said, requesting anonymity. He said that the quality of food served to Kawan was unhygienic and it was being fed on sugarcane and hay by the visitors. He disclosed that for feeding sugarcane or hay to the elephant, the mahout charged Rs20 from each visitor.

He observed that Kawan was kept hungry for a certain period so that it could not resist eating sugarcane or indigestible silage fed by the keeper.

“On inquiring, mahout misbehaved with me and used abusive language and claimed that nobody could make him accountable as he had close ties with high management in the department,” he alleged.

He pointed out that the wildlife species kept in the zoo were in a pathetic condition where no proper monitoring mechanism was available at any level of the quarter concerned.

The wildlife expert shared a video clip over all this fuss with the mahout in which he is clearly visible using foul language with the visitor.

Centre for Culture and Development Executive Director Dr Nadeem Omar had submitted a writ petition in Islamabad High Court terming the zoo management as incompetent and least expert in dealing with the wildlife kept in the zoo.

He also said that a monkey of rare African species was being fed ‘Khamiri Roti’ (sourdough bread) instead of its proper feed containing vitamins. Same was the case with other animals, which were also not given proper food, he added.

The wildlife lovers and tourists alike demanded the quarters concerned to take stern action against the zoo management and ensure the wildlife in captivity under safe and expert zoo keepers.