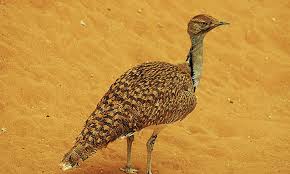 ISLAMABAD: The federal government concluded its arguments in the houbara bustard case on Wednesday, with the attorney general (AG) asking the Supreme Court to allow “sustainable hunting” of the bird.

A five-judge larger bench of the apex court, headed by Chief Justice Anwar Zaheer Jamali is hearing the federal and provincial governments’ review petition against the Aug 19 verdict of the apex court, which banned the hunting of the endangered bird.

AG Salman Aslam Butt told the court that the government did not want the order set aside in its entirety, just that the ban should not be perpetual.

Objecting to para 23 of the Aug 19 judgment, the law officer stated that the top court could not direct the federal and provincial governments to legislate a ban on the hunting of the houbara bustard.

Arguments of other stakeholders in this case will continue until Thursday.

On Oct 17, 2015, the federal government adopted the stance that falconry was a significant feature of Pakistan’s relations with Middle Eastern countries and that inviting Arab dignitaries to hunt in Pakistan was a “corner stone of foreign policy”.

The federal government had also reminded the court that the judiciary usually avoided interfering in the executive’s affairs.

On Dec 10, a three-judge bench consisting of Justice Saqib Nisar, Justice Qazi Faez Isa and Justice Sheikh Azmat Saeed recommended that the chief justice constitute a larger bench to hear appeals against the ban. Justice Isa objected to the majority suggestion and wrote a five-page note of dissent.