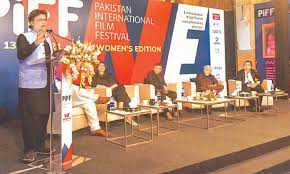 KARACHI: The 3rd Pakistan International Film Festival (PIFF) an initiative of the Karachi Film Society (KFS) began at Frere Hall on Friday evening. This year’s event is called Women’s Edition 2021 and will last for three days.

Senator Faisal Javed delivered the keynote address on the occasion focusing on the topic of the day which was Pakistani films’ growth in the international market. He said while discussing the international aspect of it we need to concentrate on the local side of things, analysing whether we’ve reached that level where we could talk international. Narrating a story, he told the audience that Gen Musharraf telephoned film-maker Shoaib Mansoor and urged him to make a film with the tagline ‘revival of cinema’. After which Mansoor made Khuda Ke Liye with the same tagline. The film was released in 25 cinema halls.

The senator argued that money was the number one problem as far as the growth of the industry goes. Producers don’t get returns for the investment they put in. Therefore their issues should be addressed. “The government creates an environment. It can’t do anything on its own (khud se kucch nahin ker sakti). It can’t even run a state channel … [Channels] are run by private groups. Governments can only create an environment.”

Senator Javed said in order to sustain the [film] industry in Pakistan you need a minimum of 1,000 screens. We have hardly a little over 150 of them. In Japan there are 3,600 cinemas. “Prime Minister Imran Khan has approved an entertainment, film policy which will soon be launched. It’s only a matter of time.”

He said we need to make at least 100 films a year to sustain the industry. In Hollywood they churn out 800 movies in a year. Bollywood makes 1,800 annually. “Bollywood’s 100 films can’t match even a single Pakistani film (hamari aik film ke barabar nahin ho sakteen) because of the kind of great talent that we have … Bollywood has a cosmetic approach to film-making.”

The senator claimed after the 1960s Pakistan is again moving towards industrialisation. The film industry should also get the kind of facilities that other industries are getting. Referring to collaboration with countries such as Turkey, he pointed out, “Very soon a Pakistani film, I’m not going to name it, will be run on a mainstream Turkish channel.” He cautioned Pakistani film-makers not to copy India if they want to go global because no one accepts copies. “Present your own stuff.”

He told the audience that he, along with some other entertainment industry stakeholders, is working on a royalties’ bill because “creative people take the country forward.” Highlighting the “power of Urdu” he called it a weapon that film-makers can use to propagate their ideas. He was of the view that India uses the Urdu language in their films which has helped our cause.

With reference to giving Pakistan’s tourism industry a boot, he said the most powerful tool that can be used for doing that is the media such as TV, film and digital platforms. He rounded off his speech by urging that all of us should take ownership of the country and adopt a practical approach to life.

Earlier, founder of the Hum TV network Sultana Siddiqui shed light on the genesis of the festival. She said she likes to work with the youth as they are the future of the country. The festival provides the young ones with a platform to learn the finer points of film-making and showcase their talent.

The first day of the event started off with a panel discussion moderated by M. Kamran Jawaid on the lack of growth of Pakistani films in the international market. The panellists were Amjad Rasheed, Salina Rashid, Irfan Malik and Omer Paracha.

Mr Rasheed put it down to a “limited” Pakistani market. Ms Rashid believed we have not been proactive about “branding” our movies. Mr Paracha talked about the big language barrier that’s not enabling us to reach the international market. And Mr Malik spoke on the kind of market in terms of rupees Pakistani films have and how after deductions a limited amount is left to make a film.

Misbah Khalid anchored the proceedings of day one. 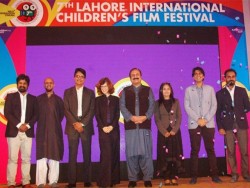 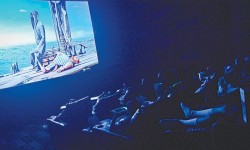