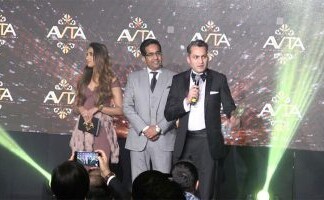 LONDON: Geo News has been declared winner in the category of ‘Urdu News Channel of the Year 2018’ at the 5fth annual Asian Viewers Television Awards (AVTA).

Two other private Pakistani television networks were also in the running for the award but Geo News was declared winner after receiving overwhelming popular support from the voters. AVTA is the only event of its kind to celebrate talent from the UK Asian television industry on annual basis and Rajan Singh, well known Asian media veteran, helms the event.

The award ceremony took place in Hilton Hotel London and attended by around 300 people, mainly from the mainstream and Asian media industry. The awards are voted by the audiences who choose the top channels, shows and celebrities in their respective categories.

In his acceptance speech, Baseem Baig thanked followers of Geo News in Pakistani and Asian communities for their loyal support over the years. “The credit goes to the entire team of GEO News for their dedication & unparalleled coverage of news and current affairs in the Pakistani media that wins them such valued awards. Geo News Network is committed to bringing genuine public interest journalism to its viewers and will continue to excel in the profession.”

Rajan Singh commented that Geo News is a popular news network. He said: “For us, it’s all about the viewers voting for their favourite channel. The viewers voted for Geo News as the best news channel and Geo News must be doing something really good to win that confidence.”

Rajan Singh added that he organises Asian media industry awards every year to highlight the quality of all Asian news channels. “It’s about how good we as a TV industry are doing in the UK. It’s about getting new media professionals exposed to the world to tell them that you are working in a great industry. I feel that we could do a lot more to cover more local content. We are now 4th generation British Asians and while keeping in connection with our culture is important but Asian news channels should cover more local and international stories.”