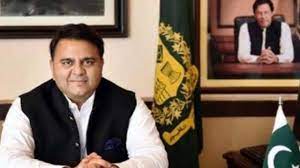 The event was hosted by Ambassador of the European Union to Pakistan Androulla Kaminara.

“Ambassadors had an open and frank discussion on content and process of legislation on media freedom and regulation with Minister for Information and Broadcasting,” Ambassador Kaminara said.

Earlier, Fawad Chaudhry said the proposed Pakistan Media Development Authority will be authorized to impose a fine on TV channels of up to Rs250 million against the current upper limit of Rs1 million in existing laws.

The minister pointed out that the Pakistan Electronic Media Regulatory Authority was a rich organization, “but unfortunately it didn’t spend a penny on journalists’ training, research and digital media since its formation.”

He said there were currently seven laws regulating media in Pakistan. “Social media is dealt by the PTA, press is managed by the Press Council, the electronic media is dealt by PEMRA, and labor regulations are looked after by Implementation Tribunal for Newspapers Employees, while the Audit Bureau of Circulation deals with newspaper registrations.”