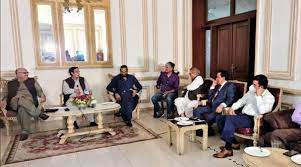 Speaking to the delegation, Pervez Elahi said the Pakistan Media Development Authority (PMDA) is a controversial bill and should be reviewed. “I do not think Prime Minister Imran Khan will approve such a controversial bill,” he said, adding that media is the fourth pillar of the state and “we fully believe in its independence, and always worked for media independence and its workers’ welfare”.

He said the freedom of media is important for the development of Pakistan and imposing any kind of restrictions on media freedom “is not in our own interests”. He said the government and the PTI should understand that local government and general election are not far ahead. Media is the fourth pillar of the state, and “we believe in its independence.”

The speaker said the controversial clause from the bill should be withdrawn without making it an ego question as an independent media is also vital to country’s integrity. He said record licences for electronic media were issued during the PMLQ government. The PMLQ government took criticism on media media positively, and expects the same from the prime minister, he added. Appreciating Ch Pervez Elahi for his support for media rights, Mir Ibrahim Rahman demanded withdrawal of the controversial clause.