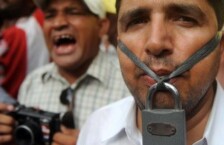 ISLAMABAD: The controversial guidelines for the media to combat terrorism, prepared by the National Assembly’s Standing Committee on Information and Broadcasting, may have been tabled before the house but legislators believe that there still is a long way to go before any such measure can be implemented.

The report titled ‘Proposals to Strengthen Media’s Role in Combating Terrorism”, which was prepared by the standing committee headed by PML-N MNA Marvi Memon, has already become controversial even before it is taken up by parliament for discussion. The committee’s proposals have already been rejected by various segments of society, particularly working journalists’ bodies and digital rights activists.

A faction of the Pakistan Federal Union of Journalists (PFUJ) headed by Afzal Butt said they had already rejected the report which, in their opinion, was impossible to implement.

He complained that representatives of working journalists were not consulted by the committee while the recommendations were being finalised.

Mr Butt said that the recommendations had been prepared without any concern for the working conditions of journalists or regard for the functioning of news organisations. For example, he said, the committee has recommended action against a reporter for filing an “objectionable report”, ignoring the fact that the role of a reporter ends after the filing of the report, which is then vetted by the senior editorial staff in any journalistic organisation.

Parliamentarians, as well as the representatives of media organisations, believe that the committee’s report has been prepared in haste and without the necessary homework.

The report itself claims that the recommendations were finalised over the span of two meetings and that too, in the absence of Information Minister Pervaiz Rashid.

When asked about the future of the committee’s recommendations, a member of the standing committee, PML-N MNA Talal Chaudhry said it was up to parliament to decide the fate of the report.

He said the report could be sent to the law ministry for suggestions of possible legislation and for preparing drafts of new bills in the light of the new recommendations. He said the law ministry could also hold consultations with stakeholders before finalising the draft bills. These drafts would then be sent to the committees concerned again for vetting and approval.

The report also has a special focus on social media and its calls for “a social media strategy” are being seen as an attempt to establish government control over the use of Internet in Pakistan.

“The focus of the information flow has shifted, so should the focus of the media strategy to deal with it…there has to be legislation to regulate social media by first ensuring that avenues of incitement to violence, abuse, and other dangerous material are brought under tight scrutiny,” says the report, adding: “Pakistani government can tighten its control over social media by acquiring new software that would facilitate extensive surveillance/monitoring of terrorists’ communications.”

The system could monitor Facebook, Twitter, WhatsApp and Viber in real-time for usage that might “harm public security or incite terrorism”. It could also screen content for “vocabulary which is contrary to law and public morality”.

However, this is exactly what digital rights activists such as Shahzad Ahmed have been campaigning against. The country director for Bytes For All, Mr Ahmed said that the report talked about the social media and Internet from a relatively “intolerant and fearful perspective”.

“Such a change-resistant mindset leads to the enforcement of censorship and surveillance controls. This behaviour is evident from the model of repressive regimes such as China, which are alarmingly idealised and replicated by countries like Pakistan, which the report also suggests,” he said, adding: “We strongly reject the China model of Internet governance in Pakistan”.

The report, he said, also talked carelessly about the need for ‘rules’ for expression and opinion, which were fundamental rights. Furthermore, he said, the report mentioned the existence of a few terrorist accounts as adequate reason to regulate the social media.

Sources within the ruling party also indicate that the government is not particularly interested in giving serious consideration to the report, as that would put it on a collision course with the media.

The report’s primary author, Marvi Memon, was not available for comment despite repeated attempts to reach her.